THE DATE – Tuesday, Olympics Day 4 (on Britain’s new calendar, which will evermore count from the start of London 2012. Get with it, world – GMT is over). The place: Olympic epicentre +1, Greenwich. Returning to work from leave is always a massive downer. Having to think about my travel arrangements the night before disrupted my customary state of denial, making it all the worse. But Boris Johnson’s disembodied voice had been telling me for weeks that I needed to “get ahead of the Games” – at stations, on buses, on trains, in my sleep. So I duly checked.

Changed timetable. Only two direct services the whole morning from the station near my house. A hazy memory of a headline from my free local community newspaper surfaced. Yes, the Westcombe Park News had been up in arms with this change to this status quo. Yes, I had blithely dismissed their rampant nimbyism. But now this was affecting ME. Maybe they were right to be angry? No, I thought, that way lies madness. But my train is going to be chocka tomorrow. Great.

Olympics Day 4 dawned. I duly headed to the station, strategically positioning myself on the platform where I knew the train doors would stop, standing well away from anyone with pushchairs, small children, or anyone who might be pregnant and/or injured (it’s more difficult to push them out of the way without attracting disapproving glances from fellow commuters – This Is London). The train arrived. Everybody got on, no one was sardined. 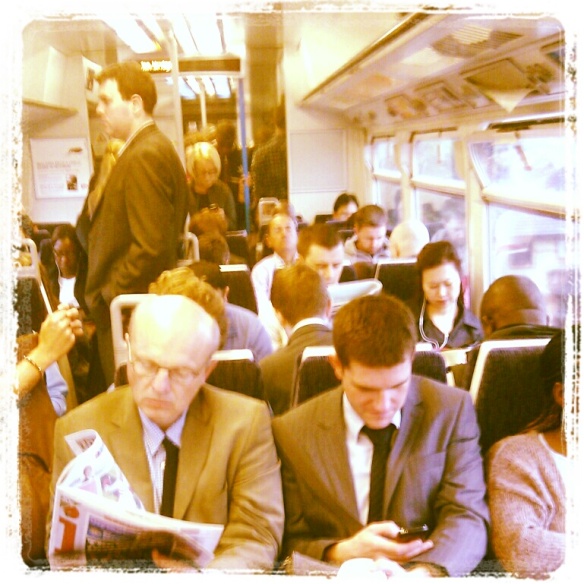 A commuter train, sometime last week. Remember to turn off your flash and the shutter noise on your phone when taking pictures of strangers on deathly silent commuter trains at 7.30am. People will give you funny looks otherwise.

Careful manoeuvring even resulted in me getting a seat after a couple of stops. I had a good book (The Hunger Games, in case you were wondering – compulsive reading that also has something to say about  the role of big sporting events in society, in an oblique kind of way). I was looking forward to clocking up a few chapters as we sat in a queue of other trains outside London Bridge station. But no. My journey was swift and untroubled. Quicker, even, than normal.

Arriving in London I found myself wishing for a few more precious moments with my book. Where was this guilt-free travel time I’d be promised (“The Olympics made me late for work”)?

Waterloo station had been transformed. The past few months it’s been a building site. But now? Where before there were workmen and cement mixers, now there are Volunteers and coffee shops. 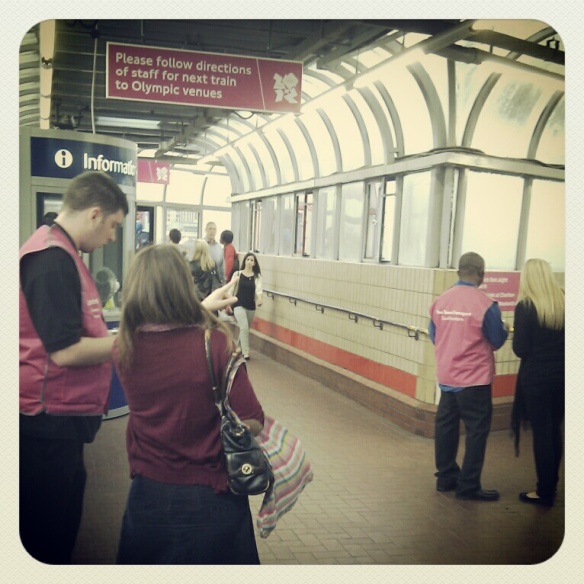 Sickeningly helpful. Don’t stand on the right, though, or you’ll make them angry. 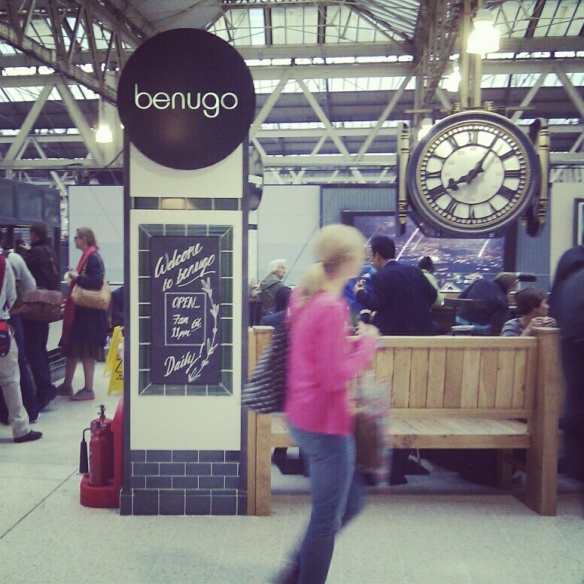 I swear that this wasn’t here two weeks ago. Is it a cruel joke, just popping up to make all the Olympics visitors think that Londoners spend their days sipping lattes in hip coffee shops? In protest, I bitterly resolved never to drink here.

Reaching work at an entirely reasonable time, I compared notes with my colleagues. “I couldn’t believe it,” said one, “there were no problems at all on my line. It’s been fine, for two days running now.” “Yeah, me too,” I agreed. “Shocker isn’t it?” We both paused for a moment, before my colleague added: “The athletics start next week. It’ll probably be awful then.” I nodded in agreement.

My journey home was a different story. All trains were delayed coming out of Waterloo East and London Bridge. There were no direct trains. I missed my connection. “I knew it would be like this,” I told myself as I lost all track of time standing on the platform and reading my thoroughly engrossing book. 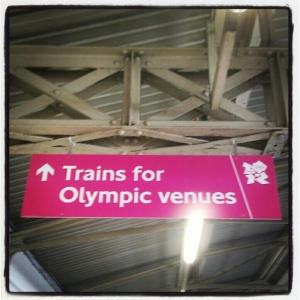 So the next day I decided to experiment by taking a bus to the nearest tube station (which happens to be North Greenwich, where – surprise surprise – the North Greenwich arena is: AKA the millenium dome, AKA the O2) and travel in using the Jubilee Line. 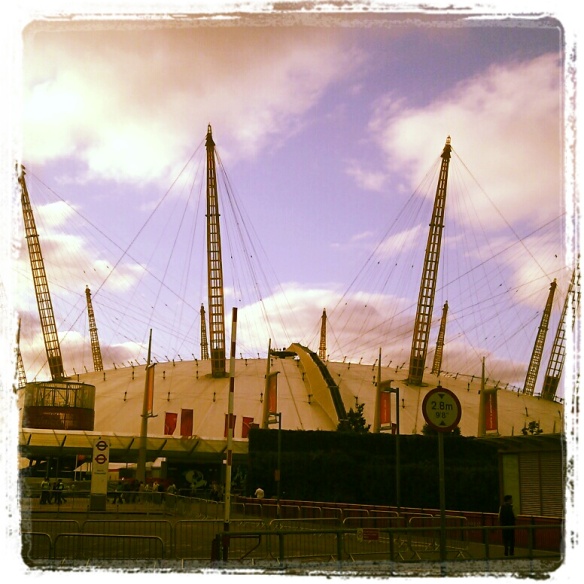 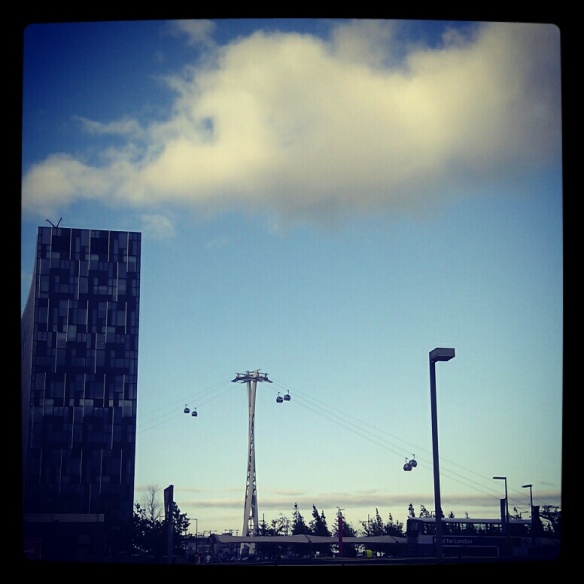 New cable cars over the river from North Greenwich to the ExCel Centre. Because how else would you get across the Thames?

Needless to say, my journey was remarkable only for its swiftness. This efficiency was starting to shake my travel convictions. And then, on the way home, I got on the tube at Westminster, the home of tourists taking pictures and standing in my way. And I started to get a funny feeling. 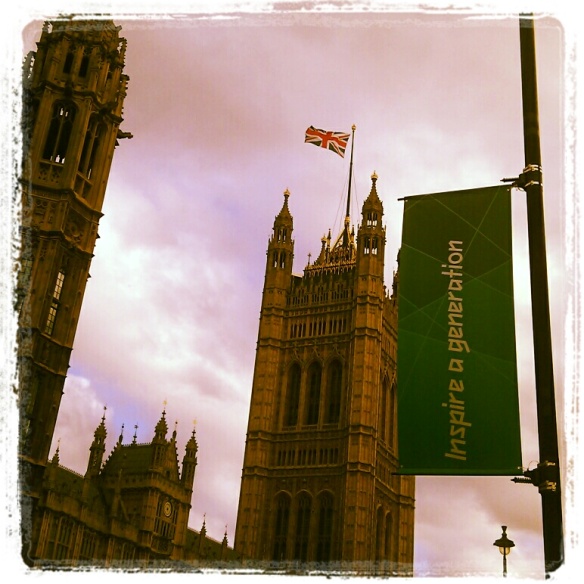 Nothing is above Olympic branding.

A giant wooden structure made up of the flags of all the countries competing in the Olympics had been set up in Parliament Square. It’s actually quite cool. I found myself standing side by side with tourists, taking pictures of it. 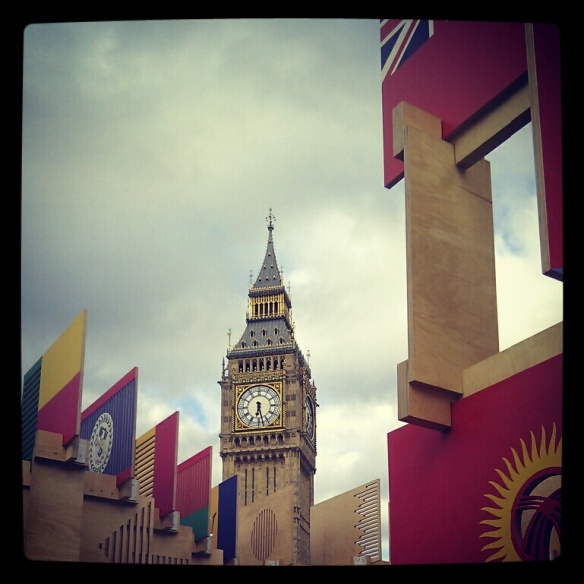 At least one tourist from South Korea has this exact same shot. I know, because a) I queued behind him for the position to take the shot and b) apparently the Olympics means that everyone is now required by law to identify their nationality with their flag somewhere about their person AT ALL TIMES. 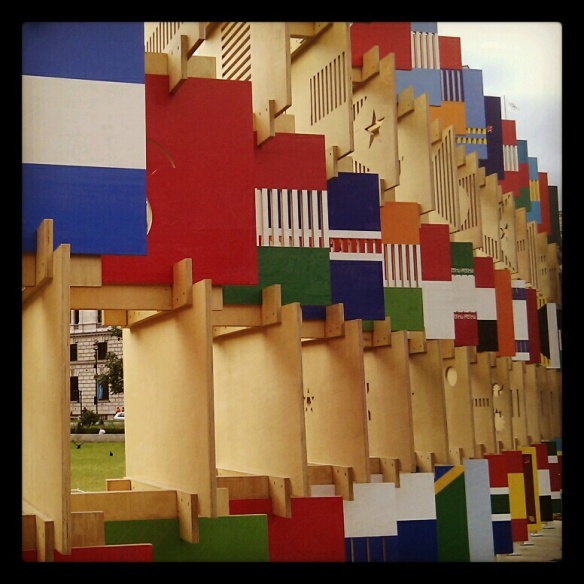 Obviously the disadvantage of wooden flags is that they don’t ripple in the wind, which, as a seasoned flag photographer, I take as a bit of a blow. But you can’t have everything.

As I stood alongside others taking the exact same picture as me, I began to think – maybe the Olympics being here is cooler than I thought? I mean, I always knew it was going to be exciting it being in London – but maybe it’s even worth my train back from work getting disrupted?

“It’s a once in a lifetime experience.” Most overused phrase when the Olympics is in town. Often used in conjunction with either a) a minor travel inconvenience that probably has no real bearing on your life or b) something that you didn’t want to do anyway which the Olympics now gives you an excuse for not doing. For example, not wanting to work past 4.30 in the afternoon. “I’ve got tickets for the [insert sport here that you’ve never watched in your life]. It’s a once in a lifetime experience, so I’m leaving work early.”

Olympics Day 6 dawned and with it came a strange sense of exuberance. The Olympics was in town! I decided to push my investigative travel journalism even further and this time cycle into central London. 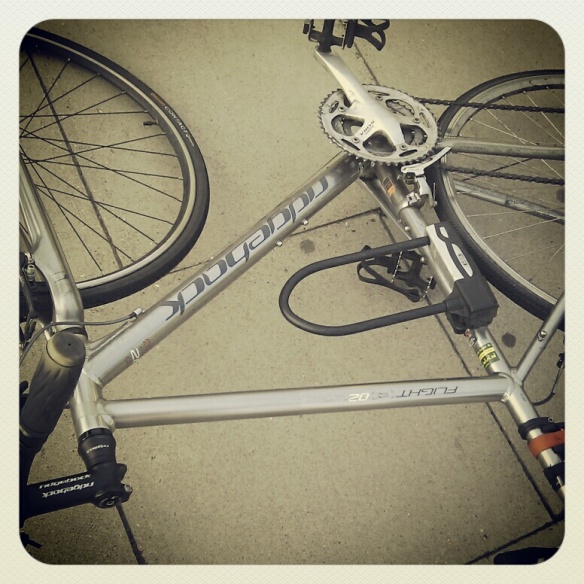 Licence to ignore all red lights, terrify pedestrians and have righteous anger about all other road users. Also the most dangerous thing you’ll ever do in London.

Yes, there were crazy diversions around Greenwich. Yes, I risked my life several times by passing into an Olympic lane (watch out: there are snipers on the buildings). But I wasn’t just cycling – I was doing my bit for the Olympics by keeping public transport free for others; others who were making a much more important journey, to the Olympic Park. I was cycling for the Olympics! It’s bit like I was Bradley Wiggins. 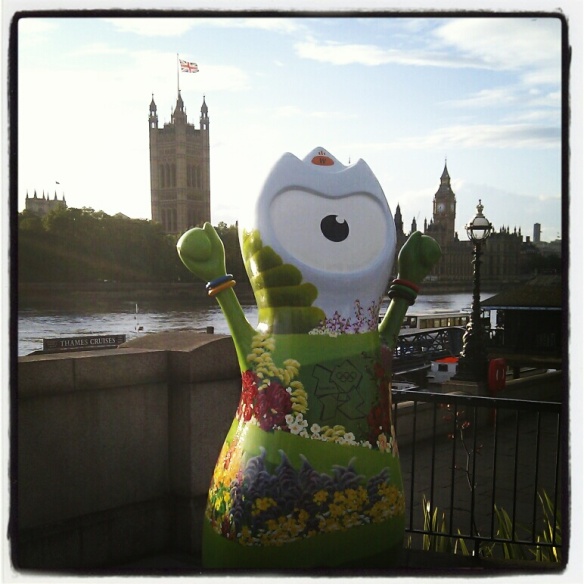 This is our Olympic mascot. No one knows why. 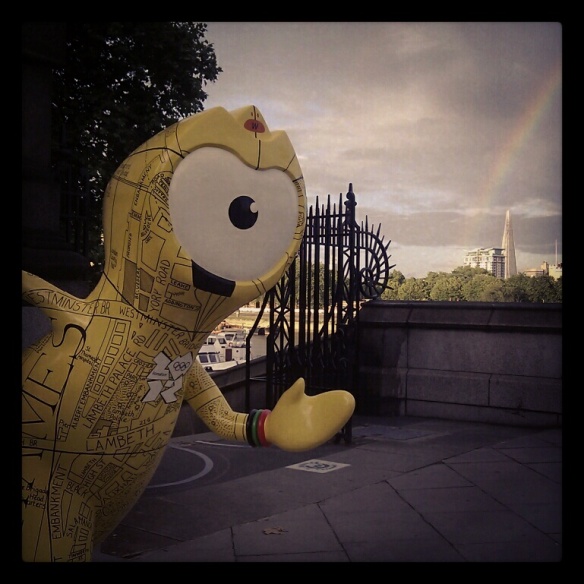 They even painted the Olympic colours in the sky.

And throughout Olympic Day 6, I had a wonderful warm sense inside me – because I knew that at home I had the equivalent of a Willy Wonka golden ticket, and I was actually excited about the prospect: 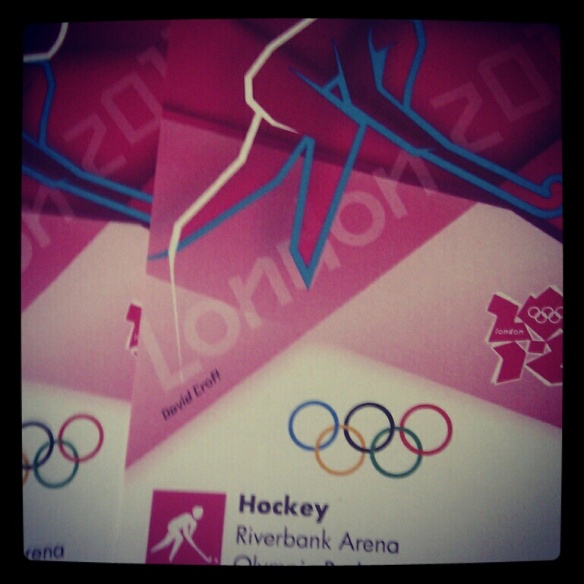 The population of the UK divides nearly in two: those with tickets, and those who applied for tickets and didn’t get any. One half of the population is even more cynical than the other.

At work that day, my colleague and I kept checking the text updates on the BBC website about how Team GB were performing. As the results were coming in, we were getting more and more excited, until in the afternoon he wandered over the my desk. “We’ve got two golds!” He announced, “shooting and cycling!” “Fantastic,” I said, “that’s great news. So where are we in the medals table? We must be pretty high now.” “Yes, we’re in sixth place.” “Sixth? That’s great. We were in twentieth place only yesterday.” His face darkened. “What? What’s wrong?” I asked. He shook his head. “France are still above us.” “Ah,” I said, glumly.

NEXT TIME: My Olympic fever reaches new heights as I visit the Olympic Park.

2 thoughts on “A strange love: or how we learned to stop moaning and love the Olympics – Part 1”