I FREQUENTLY travel Up North on a weekend, visiting friends on one side of the pennines or another. It’s nice to get out of London, it’s refreshing to have conversations with strangers, and it makes me smile to see people queue for the bus, rather than launch themselves on – perhaps leaving a fingernail embedded in one of the unfortunates not quick or able enough to climb aboard (Up North aggression is instead left until 2am on a Sunday morning outside Wetherspoons, inside Chicken Cottage, or whilst waiting for a taxi. As we all know, these moments of violence are principally caused by inadequate queueing systems).

So I was looking forward to the journey, and the opportunity to blog about this historic yet often-passed-by-city. Nothing could dampen my spirits.

God measures His love for a place in raindrops rather than sunbeams, right?

On average London receives 52mm of rain in August; Lancaster receives 128mm. So obviously I was happy that I would be getting an Authentic Travel Experience for my first non-Olympics related post. I wasn’t disappointed.

That’s real Northern rain, right there. None of this southern sunshine guff.

Virgin Trains announced last week that they were unsuccessful in their bid to renew their 15 year contract running the West Coast mainline. Strangely, I found myself feeling a little sad at this fact. So many hours of my life have been spent stuck in the middle of nowhere on their red seats. Also, they were the first train company to give us those toilets with the slowly revolving doors that someone inevitably forgets to lock: you push the button to open the door, and then must watch in horror and embarrassment as someone enthroned upon the toilet is slowly revealed. Your eyes meet, fleetingly, for a moment, and you know that you’ve just shared something that should never be shared. You jab ineffectually at the door close button, but the moment lasts forever and the door keeps on opening. Then, eventually, mercifully, it slowly revolves closed, and you’re left alone, with just the sound of the train, and perhaps a stifled laugh. And the worst bit? You have to find another toilet – because you can’t stay there, waiting outside for the other person to finish. You must never meet them again. Goodbye, Virgin Trains.

Fortunately, the residents of Lancaster are used to wiling away the hours indoors whilst the rain falls outside.

There really are rules to this game.

It rained all night, but Saturday dawned… grey. Not a great prospect when we were intending a BBQ for the evening. There was little time to muse on the weather, though, as we were soon hightailing to Morecambe, just north of Lancaster. Our shopping list: leather chaps, chains, a native american costume, a bow and arrow, a handlebar moustache. (The closure of the Lancaster fancy dress shop is bitterly regretted by the city’s inhabitants, but is good for Morecambe as on Saturday it boosted its tourism by approximately 300%. It would have been more, but we couldn’t all fit in the car). 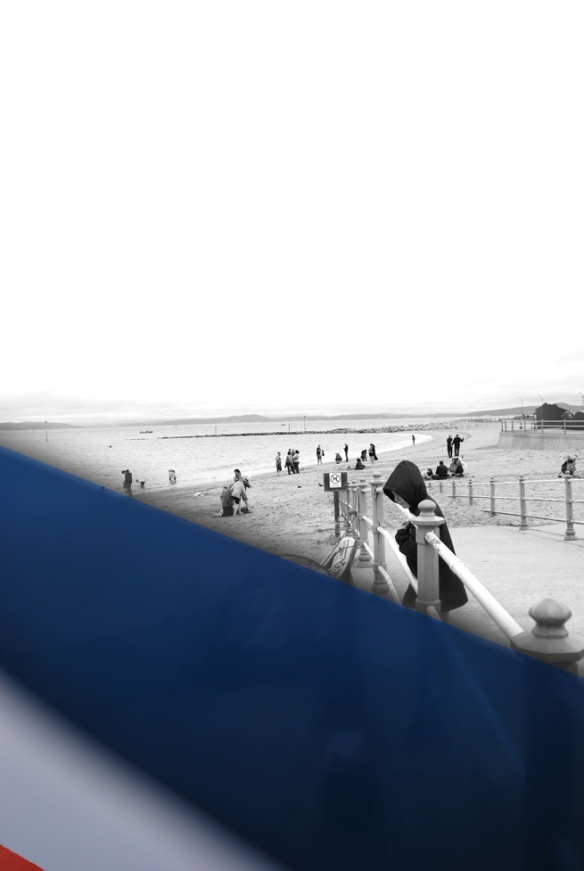 Still, I thought, the advantage to being a rundown seaside resort is that there will always be space on the beach, and low demand keeps down the price of deckchair hire.

Not to mention the price of lunch. 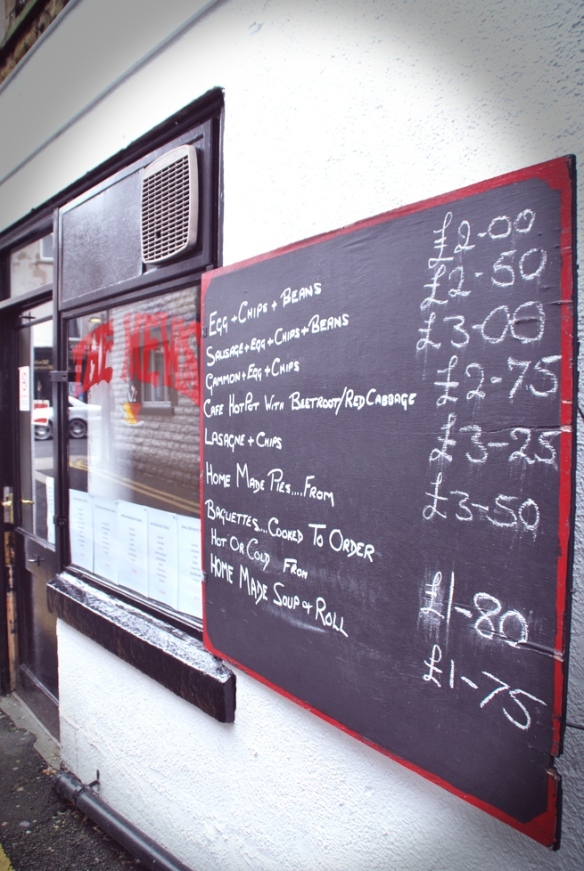 Things really are cheaper Up North.

My time in Morecambe was brief – so instead, I leave you with this video put together by the hard working and well meaning Friends of Morecambe Winter Garden, about their efforts to restore the Victorian Theatre to its former glory. It’s possible that it wasn’t meant to be funny… but it is authentically Northern, in every way. Find it here.

We drew a blank on the leather chaps and the chains, so that was one member of YMCA that wouldn’t be making an appearance that evening at the fancy dress party. To complete the remaining costumes, I was despatched into the centre of Lancaster with one goal: to purchase a bow and arrow.

Lancaster is a strange mix of old victorian architecture, budget shopping and hip studentville. It’s a small city – you could walk from one end to the other in an hour – but it’s got some great buildings and it even feels kinda hippy in places. 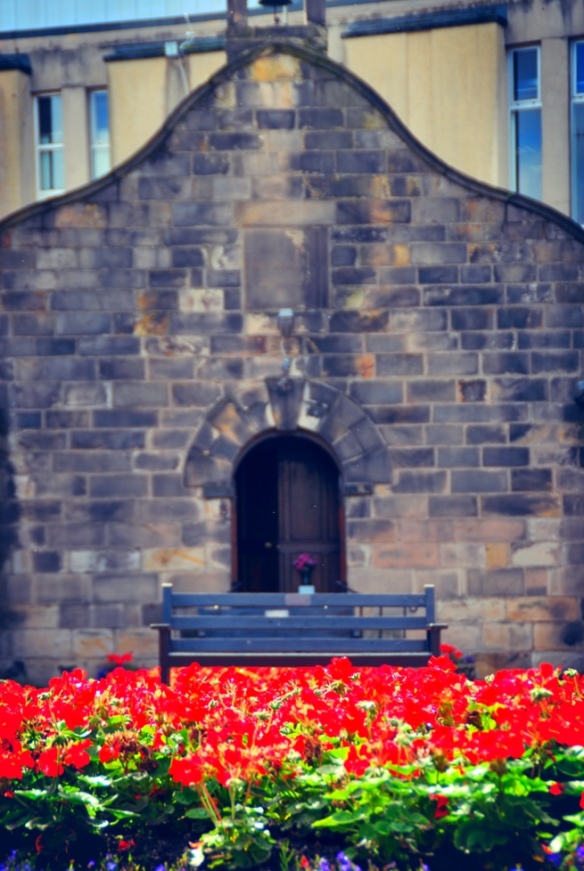 This is probably what Lancaster would look like if you were on LSD. 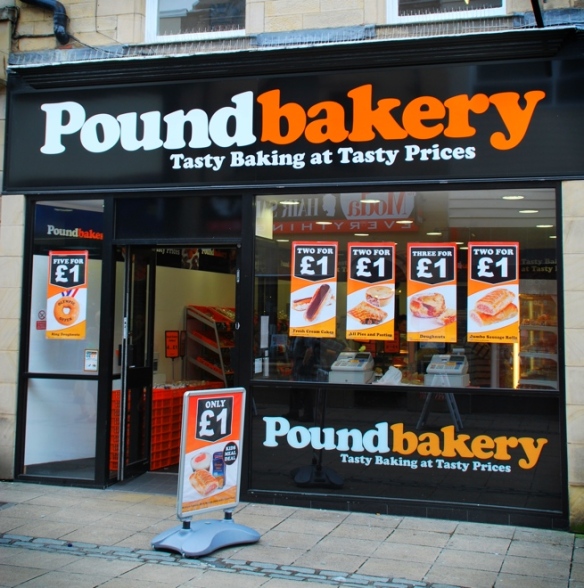 People of Lancaster: I think that you’re better than this. A brief covert survey of customers attending this bakery and a well known high street rival, positioned across the street, told me otherwise, however. Poundbakery: 4 . G****s: 2.

Until recently (last year in fact), the castle was a prison. Its use was discontinued due to the escape of notorious convict R. Punzel, via unconventional means.

We set our sights on Lancaster’s three pound shops as likely venues in which to find a bow and arrow. 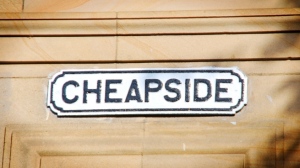 There really is no good reason for me to use this photograph except to use the line: in poundland, things were a bit on the…

Exhausted from our experience in three different poundlands, distressed that we had found no bow and arrow, we retired to the Storey Institute for lunch and some covert intelligence gathering. 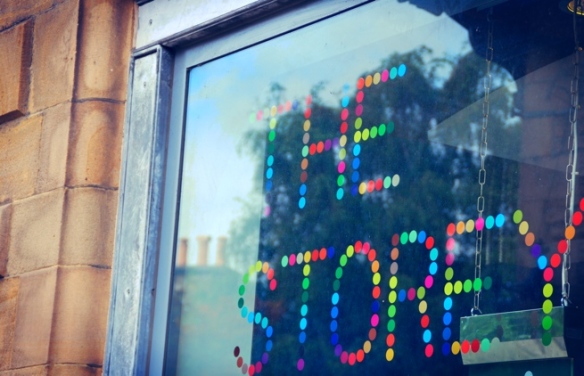 The Storey Institute. A wonderful building that is home to the Lancaster LitFest and various creative businesses. Also, coincidentally, where our wedding reception will be held. Last week the company which owns the venue went into liquidation, and the council has withdrawn funding for the building. Our intelligence gathering was compromised by Beckie loudly talking in front of the bar staff about how we were going to get married there. She was not very forthcoming with intelligence, beyond “we might not be here in a month.” Great. Do you know how many hours of my life I spent going around wedding venues? Do you? I travelled the country to find this place…. Then Beckie gently peeled my fingers off of the bar maid’s collar and made me put her down. Afterwards, I sat in a darkened room to calm down. 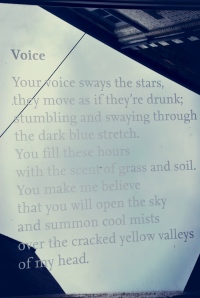 Do you know how difficult it is to find a venue to fit a literature themed wedding? DO YOU?!

This dress is made entirely of books. Apparently “it’s a fire hazard” to get married in it, so Beckie tells me. Consequently I’m not allowed to wear it. 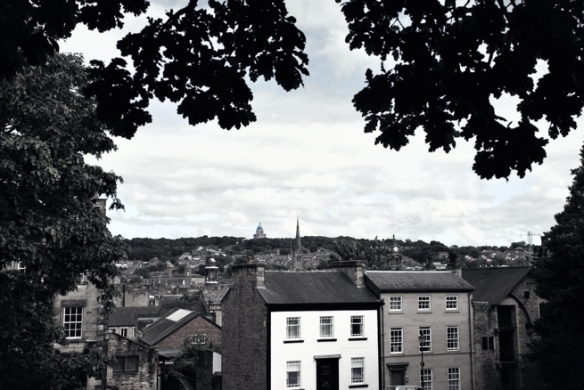 We’re getting married in the strange, green nipple shaped thing on the horizon.

Sitting in the Storey Institute cafe, I stared into the dregs of my Americano. “Perhaps someone will save the place?” I wondered aloud. “But if they don’t… what if…” Fortunately, at that moment, we were saved from a close encounter with reality by the interruption of friends who had also chosen to eat lunch at the cafe. Friendly banter staved off The Conversation. The sun came out. And we did gain important intelligence, after all: Lancaster has a FOURTH pound shop. Yes, Pound Fever was going to be our saviour. With an optimistic bounce in our step, we set off to find a bow and arrow.

Sunshine really does make everything better.

It cost three quid, not £1, but we forgave Pound Fever because it was sunny, and because we were desperate.

The BBQ was a success. There’s probably a beautiful metaphor here about the delicate nature of spider webs, their transient beauty and our wedding venue. Unfortunately, moments later the bin which this web was attached to was moved, and the spider despatched as a potential hazard to party goers.

And we still don’t know whether we’ll have a venue for our wedding reception. But if my journey to Lancaster reminded me of anything, it was that it’s always the people that make a place. And surely the same must be true of a wedding, right? (street party…?)

The sailor is Lenny, the birthday boy of multiple Village People costumes fame. I didn’t see him use that bow and arrow all bloody night…