WE ARRIVED IN Bangkok tired, unwashed, and with the faint whiff of vomit about us. The flight from Dubai had been traumatic. Five and a half hours in which the flight crew attempted to serve two meals and three drinks to us and our tired co-passengers, interrupted by long bouts of turbulence over India.

The turbulence was a problem, hitting us just after dinner had been served. There’s a special art in getting food into your mouth rather than your ear when the world is moving up, down and sideways, seemingly all at once. The turbulence was making BK-C feel queasy, so she donned her eye mask to try and shut out the world whilst I continued to plaster food all over my face. Fifteen minutes later she said she needed a sick bag. There was no sick bag. The crew were busy with clearing away dinner, and I couldn’t get anyone’s attention. So I gave her a cup – you know, one of the really tiny plastic things that they give you on flights. Not a great substitute for a sick bag, but BK-C managed. With the first cup. Unfortunately, she was still wearing her eye mask and wasn’t able to see the second cup that I held out for her.

“Oh no… you just missed the cup,” I offered, helpfully. As if she didn’t know. It was everywhere. On the traytable, on BK-C, on me. The guy sitting next to her moved pretty damn quick, I can tell you. Meanwhile, I offered a consoling pat on the back and attempted to mop up ineffectually with a tissue. Trapped in the window seat, it was all I could do. “Oh well,” I said brightly, “at least we’ll be in Bangkok soon.” BK-C began to weep gently behind her eyemask.

SO, AS MANY other stories doubtless start, we arrived in Bangkok. Prepared for the worst, we approached the baggage collection only to find that our bags had arrived. Prepared to be ripped off, we approached the taxi rank, only to walk right up and get a taxi that ran the meter and charged us less than we expected to pay. Unprepared to be wandering around Bangkok so soon and in such good, if tired, spirits, we walked like zombies through gringo-central, where we were staying, slack jawed, wide eyed and mono-syllabic through lack of sleep. Ate Phad Thai. Were disappointed. Slept for two hours. Felt worse. Met tour group. Bought some hippy flip-flops, failed to haggle. Ate at a restaurant, drank first beer of the trip. Nearly fell asleep in food. Did a tour of 7-11 shops looking for wheat-free portable food for BK-C for the long journey to Cambodia the next day. Bought more snacks and then some more just to be sure. Collapsed into bed. Declared Day 1 of travelling to be a success. 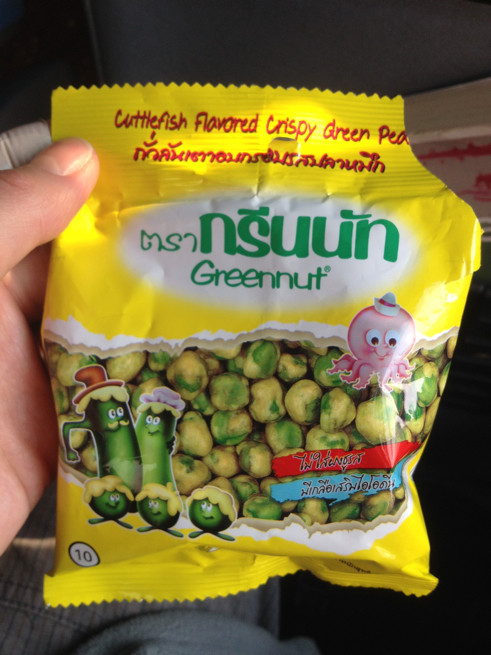 Not, as I thought when I bought this snack, wasabi peas.

NEXT TIME: We visit the largest temple in the world. I do an impersonation of Lara Croft.