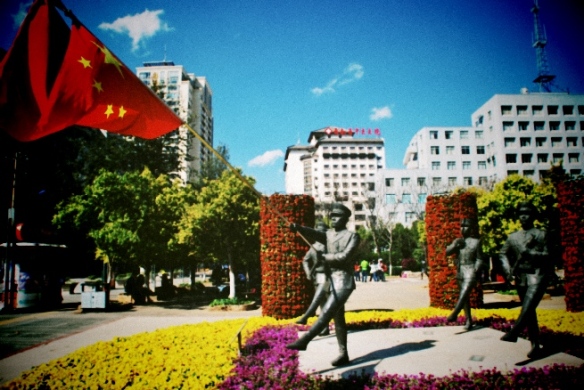 I’VE BEEN READING Paul Theroux’s account of travelling through China by rail in the late 80s, Riding the Iron Rooster. Although Theroux is one of the world’s great curmudgeons, you can’t fault his perceptive eye for a place, and as we travelled through China ourselves I found my self nodding furiously at his insights into Chinese culture. “I’ve noticed that too,” I thought to myself, “so that makes me just like Paul Theroux!” I imagined myself incognito in the background, the great travel correspondent watching, observing and taking notes. Then I went to Yunnan province, and realised that it was impossible for a foreigner to be incognito in China.

We flew from Guilin to Kunming, the provincial capital of Yunnan. I was all for taking the train, but then I discovered that it would take 24 hours so we flew instead and it took 1 hour 30 minutes, costing the same as we would have spent on the train. Every time I looked at travelling from one place to another in China, I found myself surprised anew at just how big the country is. 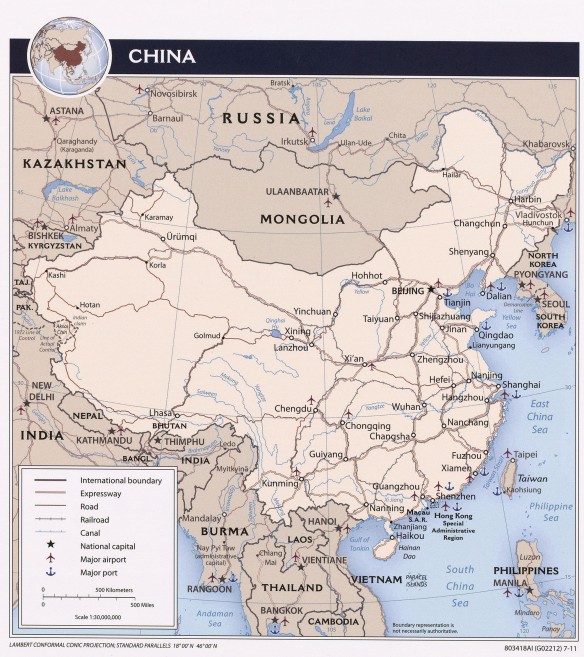 And it’s all one time zone: the whole country runs on Beijing time. When we were in Guilin, in south eastern China, it was getting light at about 6.30 in the morning – in Kunming, in the south west, it wasn’t light until about 7.30. In Xinjiang, the country’s westernmost province (bordering Pakistan, Tajikistan and Kyrgyzstan) the sun doesn’t rise until 9.40am in the winter, over two hours after the sun rises in Beijing. This is bonkers.

We arrived in Kunming early evening. It was a pleasant 20 degrees centigrade, the setting sun making the picturesque park at the centre of town – with its little bridges, weeping willows and peach blossom – seem particularly lovely as we stumbled past it with all our bags, lost in the usual daze before we found our hostel. Kunming is known as the “Spring City,” because its weather is always nice – not cold in winter, and not too hot in summer. It has pretty tree-lined streets and boulevards lined with trendy shops, all kept clean and tidy by officious looking men with walkie-talkies who order the street cleaners around and move on homeless people. We’d read in the Lonely Planet that the city was very popular with international students and that a lot of people came there to learn Mandarin – but we hardly saw any Westerners whilst we were there; perhaps a handful, at most (and they were grizzled and unfriendly, the sort of traveller who would be rude to you because you had the same colour skin as them). 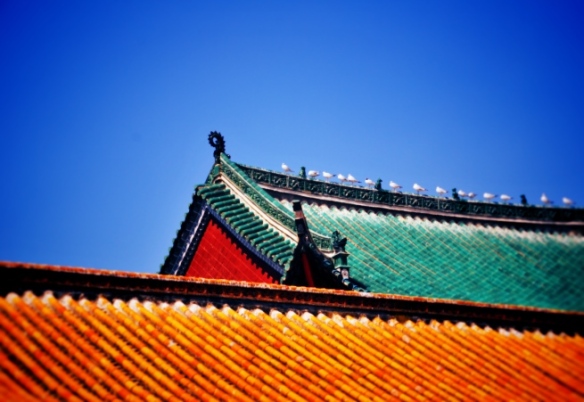 The next day, we wandered through the park in the centre of town. It was sunny and teeming with tourists. Stalls sold snacks, drinks and tourist tack. A man on a stage whipped a crowd into a frenzy as he auctioned off mysterious looking cardboard boxes. We ate fried potatoes covered in salt, pepper, chilli and possibly crack cocaine they were so addictively delicious. And we had our own crowd. Yes, we too were a tourist attraction. In a garden full of peach blossom trees people were posing for photographs beneath the peach blossom, until they saw me and BK-C and then they stalked us amongst the blossom for a quick snap of the funny looking foreigners. One woman just came up and asked for a photo with BK-C. BK-C demanded one in return, with her whole family: 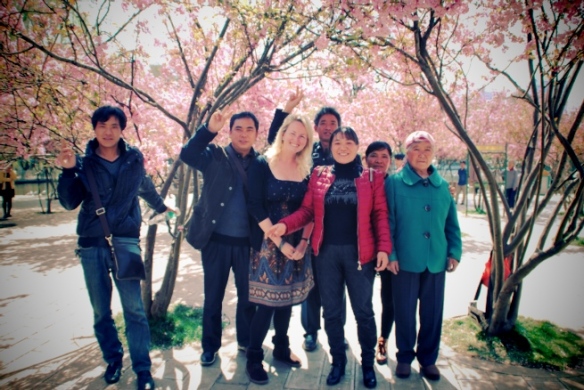 What cracks me up most about this picture is how deeply unimpressed the older lady on the far right looks. At this point I was holding my two fingers up in the V for victory sign that is such a popular photo pose in this part of the world. She was having none of it. 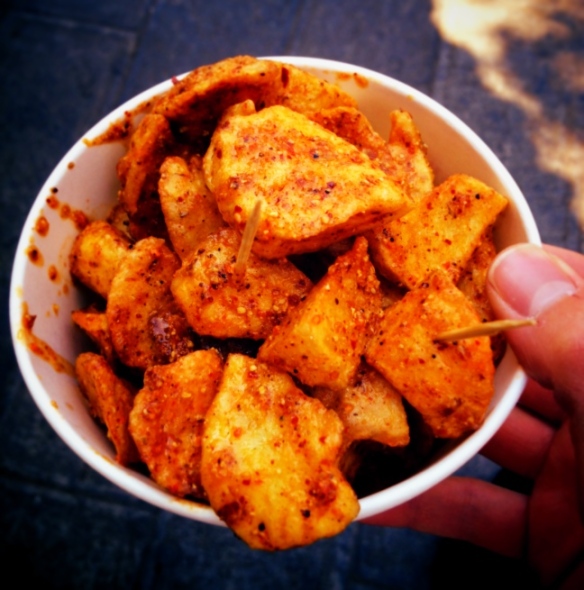 Have yourself a bite. The first one’s free… 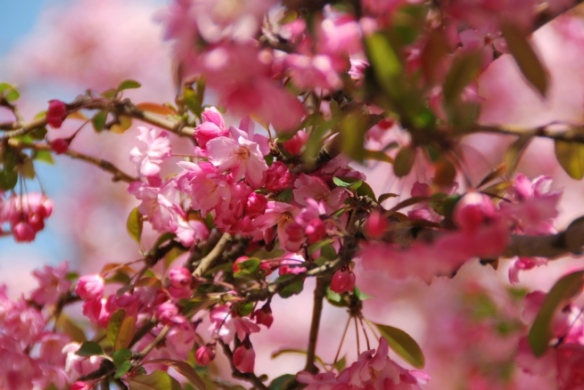 One man followed us around for about 20 minutes until, when I was teapotting in front a giant teapot (why wouldn’t you?), he plucked up the courage to ask for a photo with me. It must have been my uncanny teapot impression. 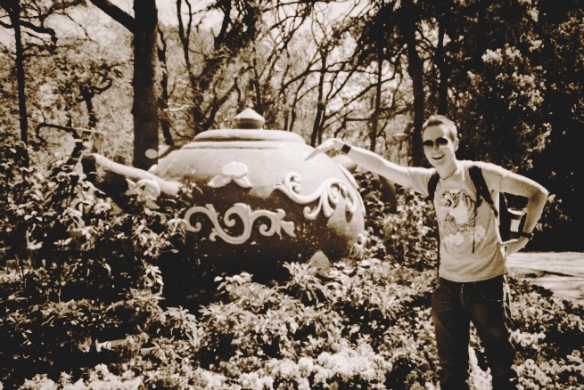 I think that spending a lot of time with just the two of us may have jeopardised our grip on normality somewhat. 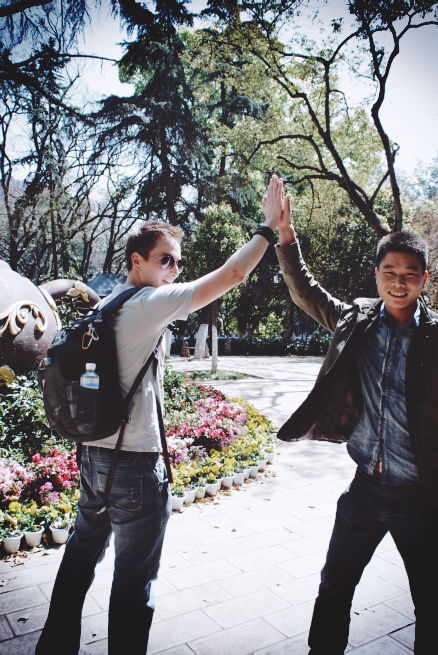 This was our first encounter with our new found celebrity status. It’s carried on throughout East Asia. Some people pretend to take pictures of whatever’s behind us when they’re really taking pictures of us: 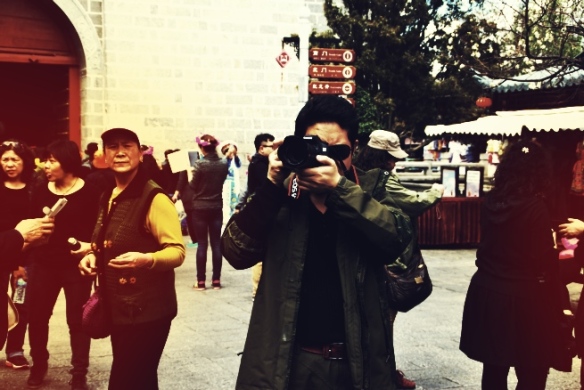 Here’s a man that I photographed pretending to take pictures of something behind us. He quickly refocused his lens on something else when I pointed my camera at him.

Other people just come right out and ask (which actually I prefer, as it feels less like you’re an animal in a zoo). If there’s a group of people sometimes we’ll rotate through the whole group doing photos with them. It’s given me a new appreciation for famous people – it must be very tiresome your face not being your own. Our new favourite thing to do is to either randomly pose for people who are secretly taking pictures of us – one couple literally fell over themselves with excitement when we did this – or to photobomb other people’s photos (people go mental – in a good way (I think) – when we do this). This must be what it’s like to be Bill Murray.

WE WEREN’T THE only people in the zoo. Chinese people come to Yunnan province not just for the spectacular scenery, but also to see the many different ethnic minorities who make the province their home. All over the province, there are groups of Chinese tourists having their pictures taken with members of these ethnic minorities in their traditional dress. The ethnic Han Chinese (who make up 92% of the population of Mainland China) seem to view these people as a form of walking entertainment – a bit like the Disney characters who walk around Disneyland, posing for photos. They’re an oddity to be ogled. 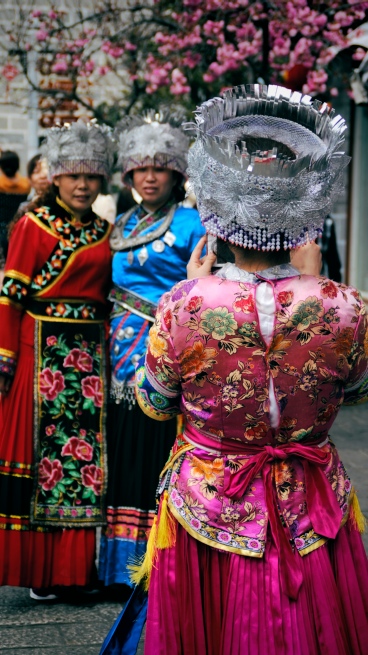 In Dali and Lijang, there was a big business of renting out the traditional dress of different ethnic minority groups so that Han Chinese tourists could dress up, have their photos taken and laugh at how funny they looked. 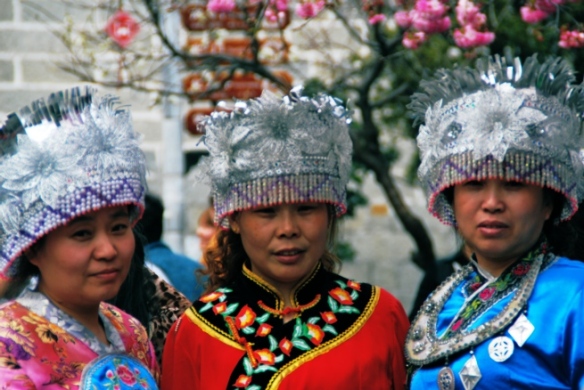 WE VISITED THE Provincial Museum of Yunnan, where there was an exhibition on about the “Intangible Cultural Heritage of Yunnan’s Peoples.” Given the interest that Chinese tourists had in different ethnic groups, we thought that it might have been popular. But it wasn’t.

The museum was a grand looking building with marble colonnades and a huge sign with golden lettering. It sits just off a main road and outside it was busy, hot and noisy. Inside the cavernous foyer it was cool, dark and silent. Two security guards were fossilised at a table just inside the doorway, next to a knife arch and a sign saying that all bags would be searched. They wore green uniforms with epaulettes and big, peaked caps. As we walked though the arch and it screamed that we had metal on us, one of them slowly rose and sighed. I offered him my bag to search but he just waved it away and led me over to a bank of lockers – all empty – and locked it up there, using a 1 Yuan coin from his own pocket to pay for the locker. Upon first inspection, the information desk in the centre of the foyer appeared to be unmanned, but actually the man sat behind it had died with his mobile phone glued to his forehead, his cheek resting on the desk. A worried looking woman eyed us from her hiding place behind the cash register in the gift store. On the other 4 floors we saw many men in uniforms guarding the dust gathered in the corners, along with the occasional, presumably lost, Chinese tourist. We left having learnt little about Yunnan, but plenty about the resource profile of Chinese state run institutions.

THERE IS A postscript to our experiences of difference in Kunming. The day after we left the city, there was a horrific terrorist attack at the train station – 29 people were killed and many more injured when a group of people ran through the station with knives, stabbing and slashing indiscriminately. Those responsible for this attack were Xinjiang separatists. Xinjiang province, in the North West, is mostly populated by Uighurs, a people who are ethnically and culturally very distinct from the Han Chinese: they look like Afghans or Tajiks, have their own language, and follow Islam. After our experience of seeing and being ethnic minorities in China, it might be tempting to draw conclusions about the motivations and causes for this act of terrorism that elide what is, in fact, a complex situation. I’m not seeking to do that. This terrorist attack was a despicable and deplorable act that can never be justified. But I also can’t help thinking that China’s approach to its ethnic minorities does little to win hearts and minds. 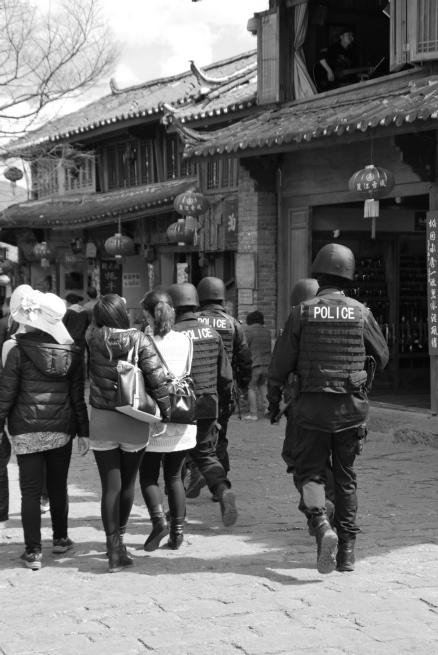 NEXT TIME: I discover that China isn’t all cities and farms.

This post was written on the bus from Sun Moon Lake, Taiwan, to Taipei, and posted in Kyoto, Japan.

1 thought on “On Becoming a Celebrity in Yunnan Province”