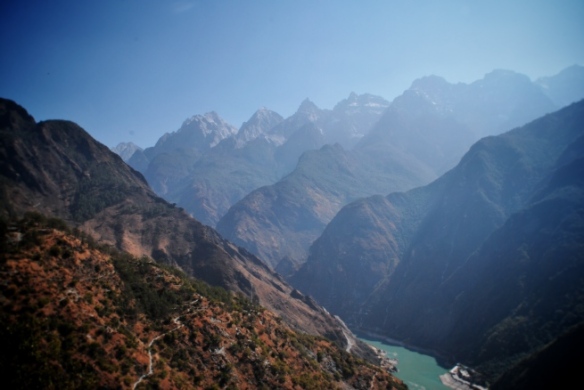 ABOUT A QUARTER of the way through his account of travelling through China by train in the late 1980s, Riding the Iron Rooster, Paul Theroux writes: “so far, China seemed a place without wilderness. The country had been made over and deranged by peasant farmers.” He wasn’t wrong. Even in Guilin, a place of ethereal beauty, concerted efforts had been made to make it the Authorised River Tour of the Place On the Back of the Twenty Yuan Note With Visits To Ancient And Totally Authentic Farming Villages. In Yangshuo, a town amongst the limestone karsts that are the area’s trademark, farmland extended right up and indeed onto the stone towers. So when we told people that we were going to Yunnan and they said that it was a beautiful wilderness, I was sceptical.

Coming into land at Kunming airport, we’d seen acres and acres of poly tunnels stretching off into the glinting, plastic distance. Somewhere in the haze there were also mountains, but they seemed very far away. We decided to try and get closer to them by travelling to Dali City, about four hours drive west of Kunming. After similar experiences in South East Asia travelling through mountainous country, I was expecting a very windy journey on the bus. But I’d forgotten that Chinese roads are all straight. I presume that if they encounter any mountains on the way, they just blow them up. At least it meant I didn’t get travel sick. 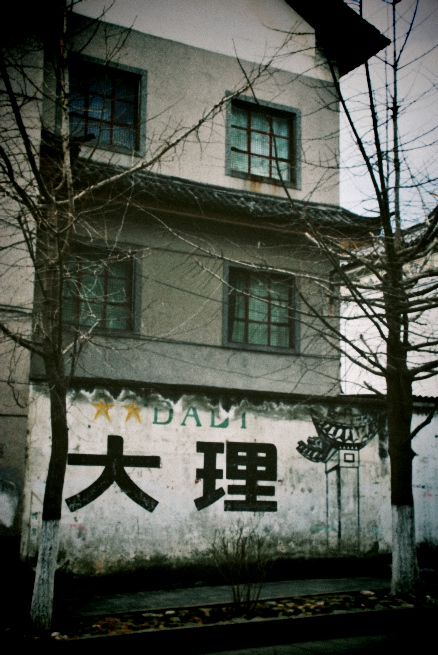 Dali is a pretty little walled town that sits on the edge of a lake and under the shadow of some fairly imposing mountain scenery. We were there mainly on the recommendation of an American girl that we’d been on a cookery class with in Chiang Mai, northern Thailand. After we’d started talking again following the customary where-is-the-hostel-my-bag-is-heavy-I-told-you-it-was-this-way argument, we were able to appreciate why she’d recommended the place. This was the view that evening from the terrace in our hostel: 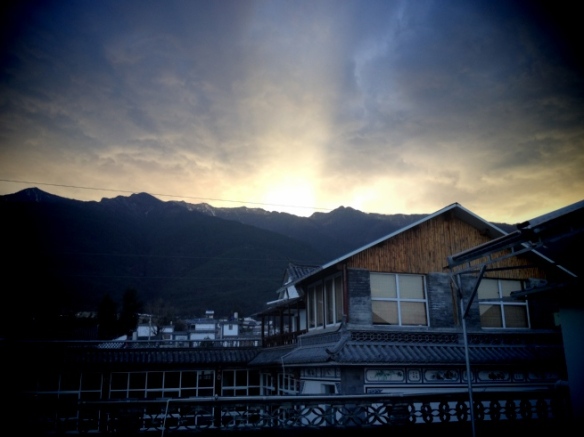 The next day we wandered into the town itself, which was full of quiet streets lined with waterways and peach blossom trees. 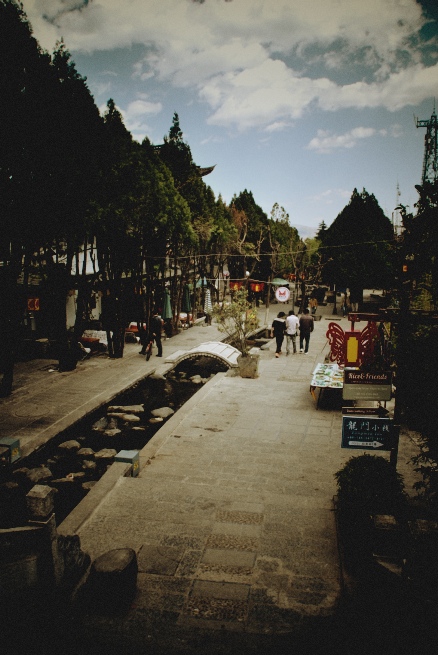 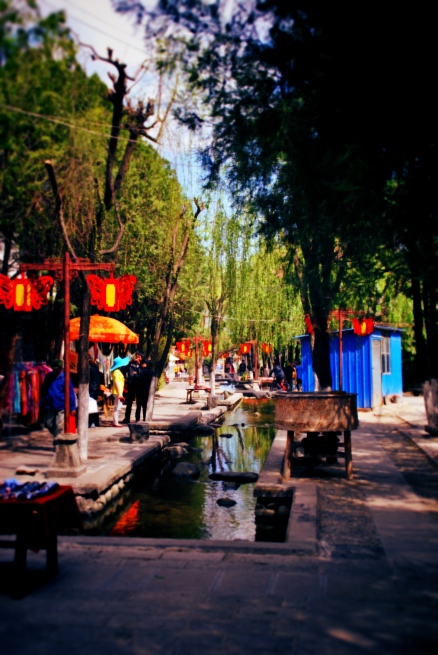 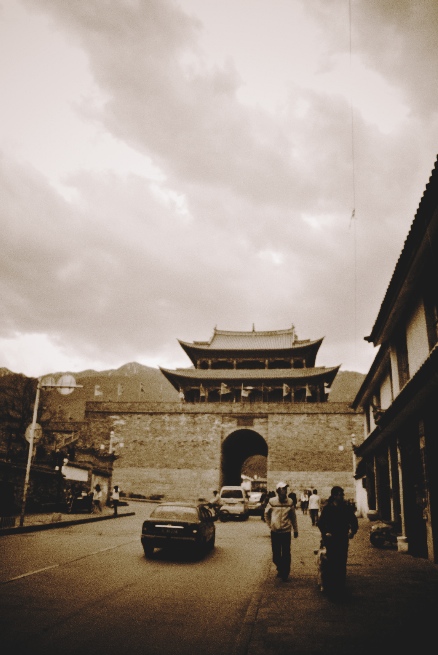 We came across an antique market, where traders laid out their goods on groundsheets at the side of the road. A combination of Chinese tourists and what appeared to be some serious buyers browsed through the goods, the buyers holding up pieces of jade and amber to examine them with their eyeglasses. In addition to these semi-precious stones there was a whole assortment of old Chinese wares from coins, teapots, and opium pipes to knives, chairs, and books. We didn’t know it at the time, but – with the exception of the Terracotta Warriors – these were the only genuinely old things that we’d see in Mainland China. Most “antiques” in China are just new things made to look old, and usually not very well. Most were destroyed during the Cultural Revolution, and those remaining are cossetted away behind closed doors, reserved only for the serious collectors. Later, in Beijing, we visited a big antiques market and were bitterly disappointed because it was all “handicrafts” and things that had been made to look old by reversing the vacuum cleaner. So we were glad that we took the chance in Dali to buy something genuinely old, purchasing a well used Chinese seal set made of solid copper (and, less good for my luggage, weighing about a kilogram). We haggled with the seller – fairly ineffectually – through a Taiwanese-American lady who happened to be there. She didn’t think that we got a very good deal, but we didn’t care because we loved it. 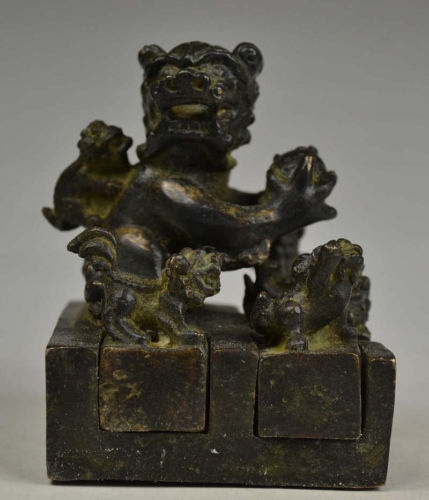 I’ve been carrying this around in my bag ever since, waiting until we meet up with our parents in Thailand so that I can offload it to them. Haggling in China is different to what we’d experienced previously. In SE Asia it’s a fairly good-natured affair, and you usually start off at about half the asking price and work upwards. In China, you start off at quarter the price and try your very hardest to stick to that price. Every Chinese trader we dealt with drove a hard bargain and gave nothing away. Which explains why I ended up paying £7 for a pair of gloves when I visited the Great Wall. £7 may not sound like a lot, but, trust me, when you’re buying gloves made in China, in China, it is. There’s a well known Chinese phrase: “It’s always easy to fool a foreigner.”

After the antique market we continued down quiet lanes until we reached a street that contained approximately 30% of the population of China. This is the other side of Dali – the one that’s been discovered by the Chinese tourist market. We blended into the crowd in our usual way by posing for pictures. 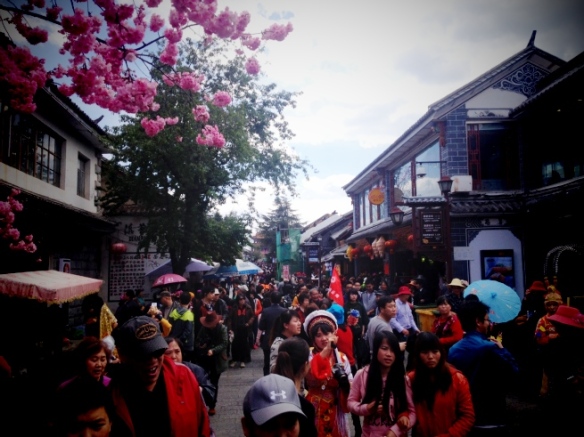 The Chinese like to go to popular places and do popular things. If it’s not popular then, well, it’s not popular. This means that it can be surprisingly easy to escape the crowds in China. The Yunnan Provincial Museum, for example.

WE DISCOVERED THE other 70% of the Chinese population at our next stop in Yunnan Province: Lijang. It’s supposed to be a beautiful old Chinese town, with distinctive architecture. In fact, it’s a new Chinese town built to look old, with Disneyland architecture. It has spectacular views of mountains and many, many shops, most of which sell dried Yak meat for you to take home to remind you of that time you went to Yunnan province with everyone you know. 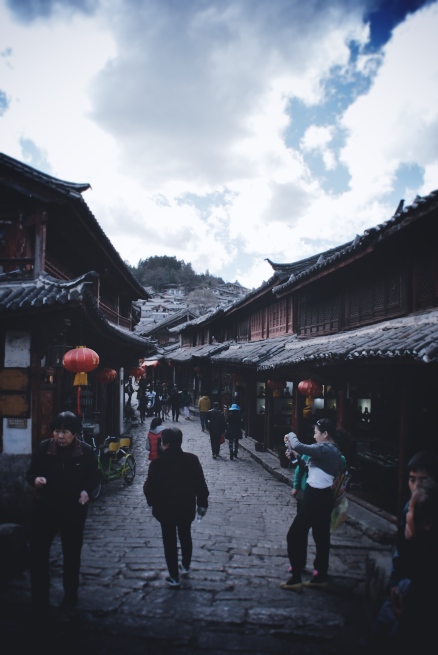 Fascinating though the people watching was in Lijang, we were there only as a stepping stone onto Tiger Leaping Gorge, the one thing in China that I Definitely Wanted To Do. 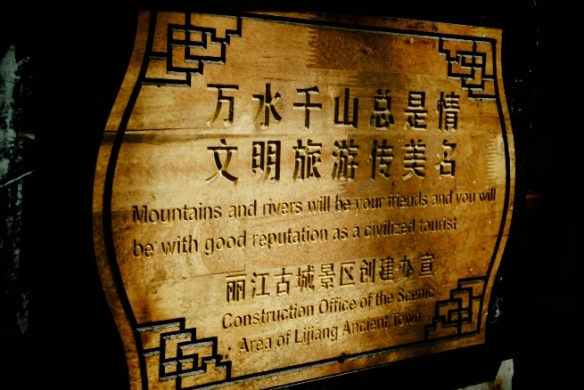 So early one morning we said goodbye to our backpacks and boarded a minibus to Shangri-La (no joke, this is actually a place in Yunnan – formerly called Zhongdian until it was renamed in 2001 to attract tourists, supposedly because it’s the place that British author James Hilton based Shangri-La on in his 1933 novel Lost Horizon), which passed by the small village of Qiaotou, where the trail for Tiger Leaping Gorge begins. 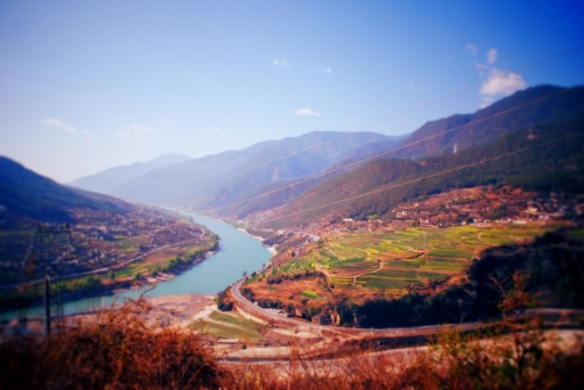 Looking back from the start of the trail.

We arrived at the trailhead having made three new friends – from Germany, Israel and France. We set out at a brisk pace, hoping to escape the expected hordes of other tourists. After all, the Lonely Planet lavishes praise on TLG, calling it the must do hike in China, and Chinese tourists are ubiquitous in the rest of Yunnan. But, in fact, we were alone as we made our way up a twisty paved road that soon gave way to a gravel path. It was a clear, sunny day and we looked out over a steep sided valley patched with rice terraces. We paused to look out over the view and adopted a more leisurely pace. After about half an hour, though, our Israeli and German friends said goodbye and marched off at speed – they were intending to hike the entire gorge in a day, whereas we had the leisure of two days. It was just myself, BK-C and Lorette, our new French friend. For most of the rest of the day we didn’t see a single other person and had the most spectacular views in all of China just to ourselves. 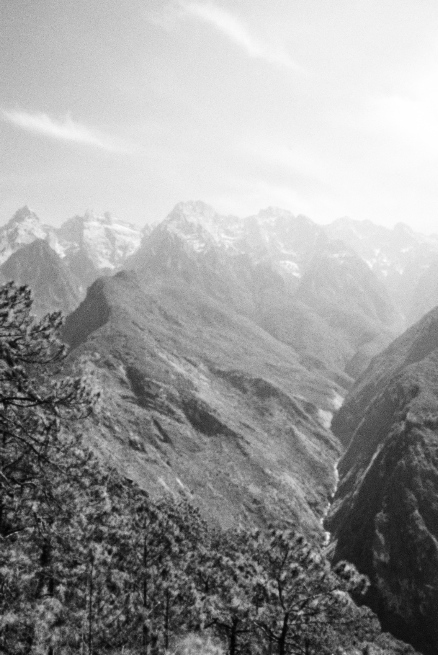 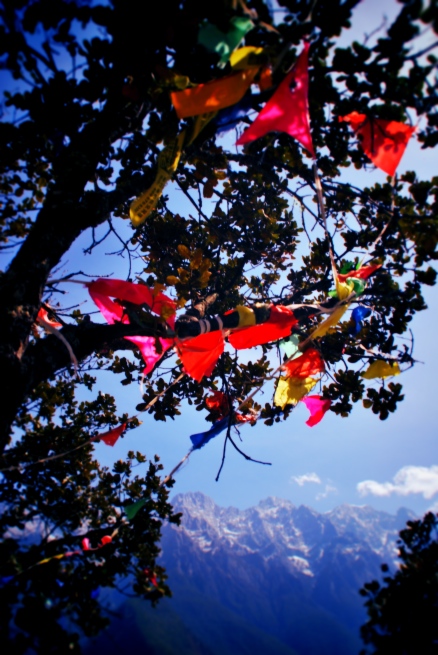 If you’re a francophone then you can read Lorette’s account of our TLG hike here. If you’re not a French speaker, then you can enjoy her pictures and, if you venture further into her blog, you’ll see her wonderful, wonderful drawings, some of which she shared with us that evening (packing your sketch book and a set of watercolours at the expense of an extra coat definitely makes you a proper artist). Lorette was one of those chilled, inspiring and life affirming people that you seem to meet when travelling, as if it was the most natural thing in the world. She’d been working in Cambodia for the past eight months, teaching physiotherapy, and was on her circuitous way back there now, before finally heading back to France. Losing ourselves in conversation helped us to conquer the 28 gruelling switchbacks to the top of the gorge. 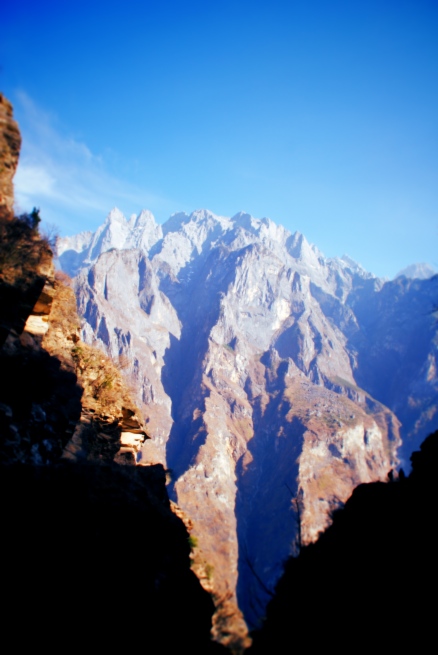 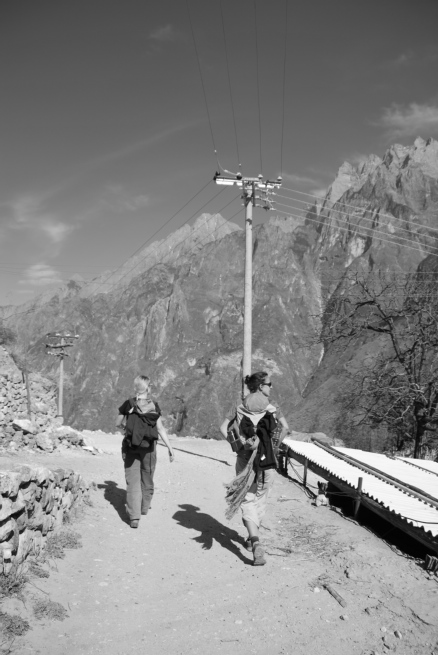 We lunched on big, cheap bowls of noodles at Tea Horse Guesthouse, about half way, and then stayed the night at the confusingly named Half Way Guesthouse, about three quarters of the way along. Perhaps an hour before we reached Half Way Guesthouse, we caught up with the group of Chinese hikers who we’d shared the minibus with and who had overtaken us whilst we lunched at Tea Horse. At one point we all paused to appreciate a particularly breath taking piece of scenery. One of the Chinese hikers spread his arms as if to try and encompass the view, evidently overtaken by the beauty of the moment. Then he took a deep breath, gave an almighty shout, lobbed an empty plastic bottle deep into the gorge – where it will presumably join the ever increasing pile at the bottom – and stomped off. The Leave No Trace philosophy still has some way to go before it reaches China. 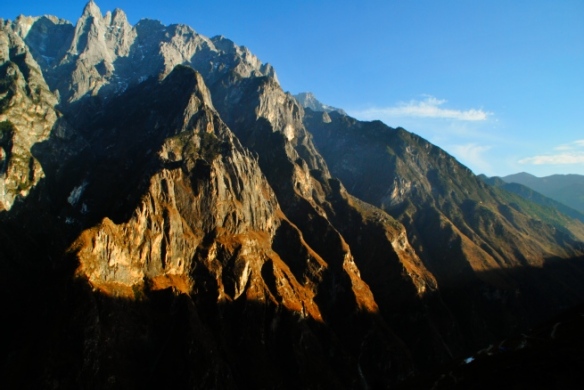 THE NEXT DAY, we rose early and hiked onto the end of the trail for most, Tina’s Guesthouse. Leaving BK-C at the guesthouse to read her book, Lorette, a Korean guy we met called De-Ha, and I all tramped down a steep, steep path to the ferocious river below. On the way down there were the usual stalls manned by locals selling drinks and snacks. We’d seen perhaps three of these the previous day on our journey along the trail, their owners lazing in the sun on what must have been a very slow day indeed. They sold water, soft drinks, beer and wild walnuts, a speciality of Yunnan. On the way down into the gorge, one of them also sold big bags of surprisingly authentic looking green stuff labelled Cannabis. We pointed this out to each other and raised our eyebrows at the owner, and she just laughed. The gorge was steep and I can’t imagine that the Chinese police make a habit of patrolling the place, though the owner was risking a bullet in the neck by selling drugs. It’s a mystery to me why anyone would want to buy booze or drugs half way up a mountain, but this is what amounts to the wilderness in China – a place where someone else hasn’t set up a shop yet. Go to Tiger Leaping Gorge, and go now. Don’t delay – soon it will be full of plastic bottles and, maybe, stoned westerners. 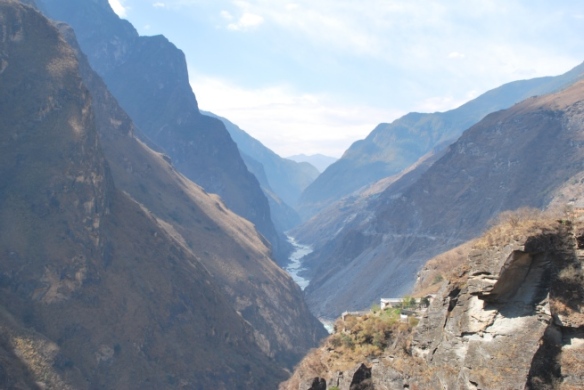 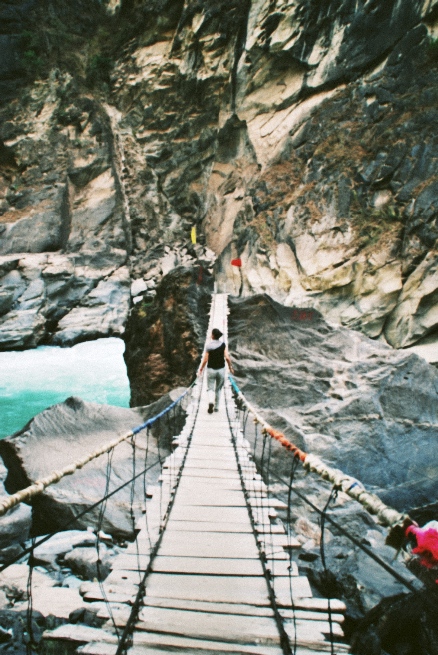 Looking to Hike Tiger Leaping Gorge Yourself? I recommend these blogs as a good resource.

The second one allows you to download the GPS track for your smartphone in GPX or KML format. I used the GPX track in MotionGPS [CHECK] on my iPhone, though discovered that I didn’t really need it as the path is well marked.

NEXT TIME: I finish up my travels in China by visiting Xi’An, Beijing and Shanghai.

This post was written on the bullet train from Kyoto to Hiroshima, and finally uploaded in Kuala Lumpur airport.