A SURPRISING OBSERVATION: beer geeks are snobbier than wine connoisseurs. Compare, for instance, my experience in the beer shop Healthy Spirits in the Castro district of San Francisco, and my experience at the Larson Family Winery, in Sonoma (which sits beside the more famous Napa Valley in the Bay Area). In the former I asked the extremely knowledgeable and, it has to be said, very friendly, man behind the counter for advice in buying a wheat beer. He took me through some of their stock, pausing over the Hell or High Watermelon beer from 21st Amendment brewery – which I had drunk and enjoyed the previous night at Starbelly – to tell me to avoid it because “it’s shit out of a can.” Several days later at the Larson Family Winery the manager of the tasting room, Marvin, was expounding the delights of trying everything and judging nobody. “There’s wine educators and there’s wine snobs,” he told me. “Wine snobs want you to think how they do, educators will admit that there’s so much stuff out there that you’re always still learning. Every wine you drink, every bit of wine lore you gather, it’s another brick in the wall of knowledge.” This may sound like a line that Marvin repeats to all who visit his tasting room, but it reflects an accepting attitude that I have found to be common amongst wine lovers, but less so amongst beer fans. 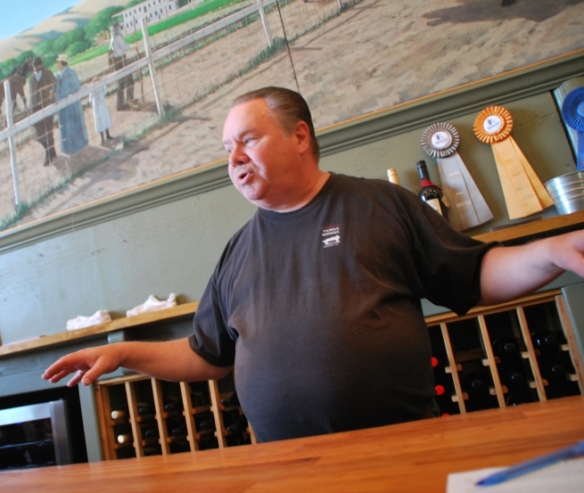 Marvin does his customary duck impression before pouring the wine. 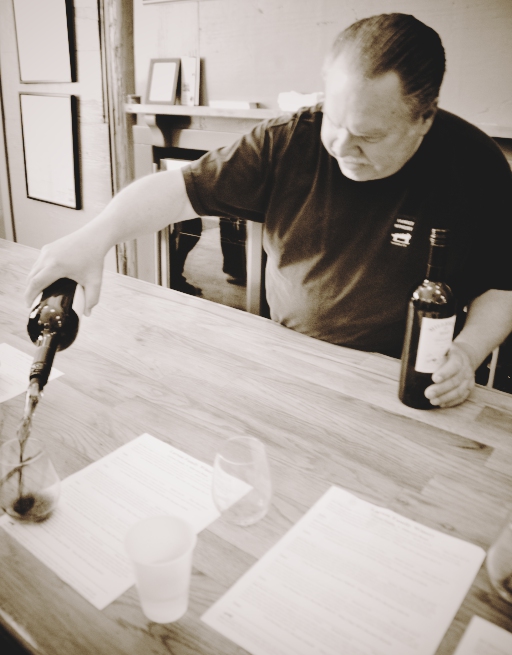 Sip sip….. Repeat. It’s easy to get the hang of wine tasting.

We were in Sonoma with Green Dream Tours (highly recommended: you can read my wife’s review of them here). Eli, the owner of the company, was our tour guide for what was the first day of the wine tour season. The sun was shining and the wind was blowing in that customary Pacific Coast way, where it whips the breath out of your mouth and makes you regret wearing only a T-shirt. Stepping off our air conditioned bus at Robledo Family Winery in Sonoma County, outside of San Francisco, it felt about ten degrees hotter then in windy SF. But within 15 minutes of arriving at the winery we had ceased to care about the heat, because we were all pissed. Drinking alcohol in the morning is like all the best bits of being 16 again: you either have no responsibilities or you don’t care about them, and it feels like literally anything could happen, all of the time. Being drunk and partly hungover in the early evening, after a wine tour, whilst wandering around an REI store in search for kit for going backpacking in Yosemite is like all the worst bits of being 16 again: responsibility for sensible decisions is something you’re ill equipped for and EVERYTHING IS SO FAR AWAY. But that was future David’s problem: at 11am I was supping my wine and loving every moment of it. 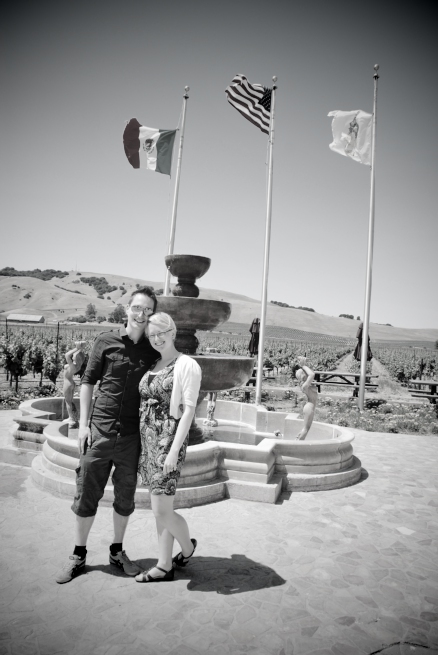 I think that you’ll agree, I am ROCKING the socks and shorts look. Have I always been this tragic, or is it something that happened when I got older? Please don’t answer that. On the plus side, after 3 glasses of wine this is exactly the kind of thing that you don’t care about.

The Vexillologists (ok I admit it: I just learnt that word through google) amongst you may recognise one of the flags in the photo above as being Mexican. Papa Robledo came to the US as a teenager in 1968 to pick grapes for the season, and never went back. Thirty years later he bought his own vineyard. Seven years after that, Reynaldo Robledo became the first former Mexican migrant worker to open a winery and start making his own wine commercially. On the walls of the tasting room there are pictures of him meeting with the former Mexican president, Felipe Calderón, and Barak Obama. In the tasting room we met one of Reynaldo’s six sons, Lazaro Robledo, who proudly took us through the history of his family and the winery. It’s one of those immigrant success stories that to my mind are so defining of America. It wasn’t grape picking season when we were in Sonoma, so there weren’t workers out amongst the vines; but later on in our trip as we drove through the Californian heartland we passed through acres and acres of fruit farms, with lines and lines of immigrant workers picking fruit. We drove for miles and miles along dusty, flat highways where every other car was a pickup truck and the sun baked the road until it cracked at the edges. The scenery changed only with the crop – from apricot trees to cherry trees, from peaches to plums; and in every field, at every junction were immigrant workers. If they weren’t toiling in the fields then they were sheltering from the sun at the side of the road, under makeshift tarpaulin sunshades, and selling fruit to passing motorists. We stopped at a few of these places, and the people were uniformly grim and downtrodden, dusty from the road and hot from the sun. No typical cheery American welcome here of “how ya doin’?” This experience of passing through the fruit farms later put Reynaldo’s journey much more into perspective for me. The tale of an immigrant coming to American and building success from nothing may be a cliche, but that doesn’t make it any the less real.

Not appropriate to use for bobbing for apples. This photograph would be better if it was straight but I was a little unsteady on my feed when I took it.

By 1pm we had visited two wineries, lunched and were now stumbling around the pretty little town of Sonoma, presumably so that our tourguides could have some respite from a tourbus full of loud drunkards.

As we wandered, I pondered on both the Robledo family’s journey and Marvin’s words about learning. There’s something that visiting a winery has over visiting brewery: community. Yes it’s true that they were small, family owned wineries that we visited in Sonoma and so it’s inevitable that there would be a sense of community, but there’s also something about the link between the land and the wine. I imagine that very few breweries grow their own grains on site; the best wineries will always have their own vineyards, probably in the same place where they also crush, ferment and ultimately bottle the grapes. There’s community around breweries, but these are the communities created amongst their drinkers, their fans, rather than the people who make the beer. This fact struck home with me when, later on in our trip we visited the newly opened ol’ Republic Brewery in the small, close community of Nevada City. A lady I spoke to in the brewery bar told me how happy everyone was at last to have a brewery of their own in town. “there’s a few microbreweries close by, like 20 miles or something,” she told me, “but they’re not ours. This one is for Nevada City.”

Beer and wine are different drinks, often drunk at different times and in different social settings. We might order a bottle of wine when out for a romantic meal, but it’s less likely that we’d order a bottle of beer. Whilst wine is a more intimate drink, beer is a drink which is social in a different way – it’s easier to imagine it being drunk at a BBQ, or amongst a group of friends at the pub. And I think that the different ways in which we consume these beverages are also reflected in the way that they’re produced, and the history – and geography – behind that production. Clearly I’m generalising here, but having visited both breweries and wineries in such quick succession, I couldn’t help but feel that there was something in the different way that we as a culture consume (in every sense of the word) the two drinks, and that this difference starts even before the first drop of alcohol is fermented.

ANYWAY, WITH ALL these thoughts kicking around my mind in Sonoma, I knew that I had entered the contemplative, thoughtful stage of drunkenness and it was time to push on through. So, we headed on to our final vineyard, where I was looking forward to rounding off my thoughts about immigration, geography, family and community by hearing about another American success story. And who did it turn out that the brewery was owned by? A bloody Brit. 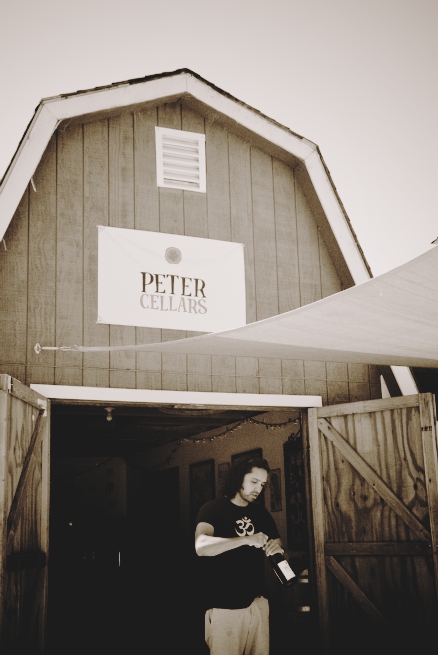 Note the humorous play on a famous British actor’s name.

It may have been the last glass of the day, but that didn’t make it any the less tastier. Cheers!