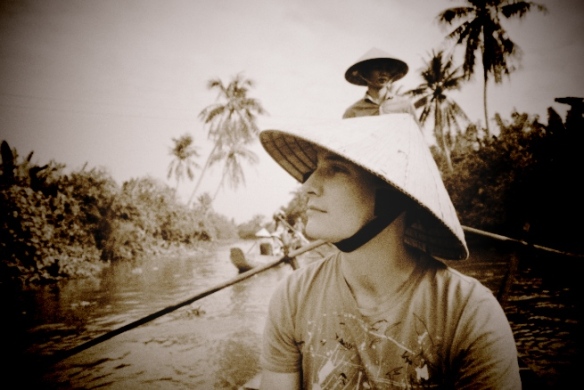 OUR FIRST DAY in the Mekong Delta ended in what we would all have been afraid to do in HCMC – going for a bike ride. “My back brake doesn’t work,” I told the owner of the rickety city bike that I’d been handed. He took hold of both handlebars, grasped the brakes, and demonstrated to me that “yes, but the front brake works.” We both laughed over my stupidity, and with a slap on my back I was on my way. Our group pedalled sedately along the road towards the village, passing shacks and farms, people waving at us from the roadside, mopeds honking at us from the road. It was nearly peaceful.

Yes the roads were a little narrow and yes the mopeds came a little close, but we Definitely Felt Safe All Of The Time.

At the entrance to the village proper, we stopped atop a bridge to take photos of the river. As I am prone to doing, I lingered a little longer to get a few more pictures. Then, packing away my gear, I rode off in pursuit of the rest of the group. I wasn’t the last to leave the bridge, but within  a few minutes of cycling into the village I was completely lost, without a single one of my fellow cyclists in sight. Perhaps I was distracted by the dog’s head on the barbeque that I saw, making me miss the hairpin turning just after the bridge that everyone had made. Perhaps I should just have been paying more attention. Either way, I was untroubled as I cycled through the market, dodging shoppers and moped drivers. Fortunately breaking the highway code in Vietnam didn’t mark me out as clueless, and I was keen to promote an image of confidence to anyone who may have been watching, so I cycled on – secure in the knowledge that I would eventually meet the rest of my group and that the final person on the bridge would soon catch up. The road curved round, I followed it, and soon I was out of the centre of the village and cycling along a dirt path bordered on one side by the river, and the other by people’s houses. I will admit to feeling some uncertainty at this point, but I cycled on – I really don’t know why. Then I saw a bridge crossing the river – a narrow, concrete affair with no sides – and I figured that I probably needed to go across to get back, as I’d already crossed the river once, right?

So I dismounted, and walked across with the bike, and you will be surprised to hear that I didn’t fall in. No, instead I reached the other side and cycled on for a full two minutes along an uneven, partially flagstoned path, before finally stopping. I was outside somebody’s house, a low brick structure with a corrugated iron roof. A dog regarded me cooly from beside the entrance. My unease began to peak – I was alone, in Vietnam, without a single word of Vietnamese except “thank you.” I paused to take in the situation, gripping my ineffectual rear brake in thought. The dog came over and began sniffing me. I tried mentally to map which way I should have gone, where I went wrong. Perhaps triggered by the scent of its barbecued cousin, the dog began to growl. It bared its teeth at me. I may have uttered the words “nice dog.” Whatever I said, it was clearly ineffectual as the dog ran towards me and I pedalled pedalled pedalled back the way I came. I didn’t pause to see how long it chased me for, but as I pedalled I thought to myself how thankful I was that I’d paid for that rabies vaccination.

And then, miraculously, I saw two figures cycling towards me – Colum, a fellow traveller and a firefighter in the Limerick Fire and Rescue Service, closely followed by BK-C. “We’re the search party,” shouted Colum. “Great,” I replied, “what took you so long?” (or that’s the reply the wittier version of me would have given – in fact I was gushingly grateful and happy at seeing people I knew).

And that’s the time that I got rescued by an Irish firefighter in the Mekong Delta. After that, I felt ready for anything that Vietnam could throw at me.

NEXT TIME: I learn about the war in Vietnam.

HO CHI MINH City (also known as Saigon, its pre Vietnam-American war name, or simply abbreviated to HCMC) and the Mekong Delta: two very different places with a lot in common. HCMC is a sprawling, urban rush, whilst the Mekong Delta is a peaceful, rural area of farms and waterways. But both play an important part in Vietnam – Saigon drives the country’s economy and the Mekong Delta feeds the nation’s people. Both are some of the most densely populated areas in Vietnam, with the sky scrapers and streets of Saigon contrasting with the farms, fruit trees and rice paddies tightly packed into the Delta. And both share a common Southern Vietnamese heritage, a separation in attitude and history from the North that is still felt by many Vietnamese today. As people are fond of saying in Vietnam (of just about anything) – it’s same same, but different.

HCMC WAS OUR first stop in Vietnam. It topped the steadily rising crescendo of beeping horns that we’ve experienced as we’ve worked our way through Thailand and Cambodia. The streets are notoriously busy, thick with mopeds and the occasional car. Crossing the street in HCMC – or indeed anywhere in Vietnam – is one of those travelling rites of passage that is so often written about as to be cliché. There are ‘pedestrian crossings’, but no one stops at them; there are red lights, but these are optional; and there are pavements, but these are mostly for mopeds, so what the hell do you think you’re doing walking on them? In Hanoi, where I am as write this, we were at a busy intersection of a main road, waiting for a less-fatal opportunity to plunge across the road, when two distressed looking American ladies came up to us. “Have you crossed the road here?” they asked.
“We’ve never crossed the road here, specifically,” I replied, “but yes we’ve crossed the road in Hanoi.”
“Oh that’s great,” one of the women enthused, “we just got here. Can we cross with you guys?”
“Sure,” I said, gripping BK-C’s hand tightly whilst subtly attempting to position her as a human shield between myself and the oncoming traffic, “we’ll go over after this red bus… ready…and go.”
And we strode out into the road, in front of a battalion of buzzing mopeds which all beeped obligingly, either to tell us that they’d seen us and would drive around us, or that they were going to collide with us (I’m never sure which). We reached the other side in one piece, the American women deliriously happy that they’d survived their first road crossing. All such crossings are thus in Vietnam.

These are the drivers that had their lights on.

School children practice badminton in a park in HCMC. Badminton is big out here – it’s common for courts to be marked on the streets. Perhaps the absence of mopeds driving across the court at the 2012 Olympics is why Vietnam’s one Olympian badminton player failed to advance past the elimination rounds.

AFTER THE CITY, Mekong Delta was wonderfully quiet and horn free. We visited a market with our guide, Vien, and marvelled at the diversity and plentitude of the produce, most of which we needed Vien to identify for us. Vegetables, fruits, fish, snakes, chickens, flowers – it was all there. 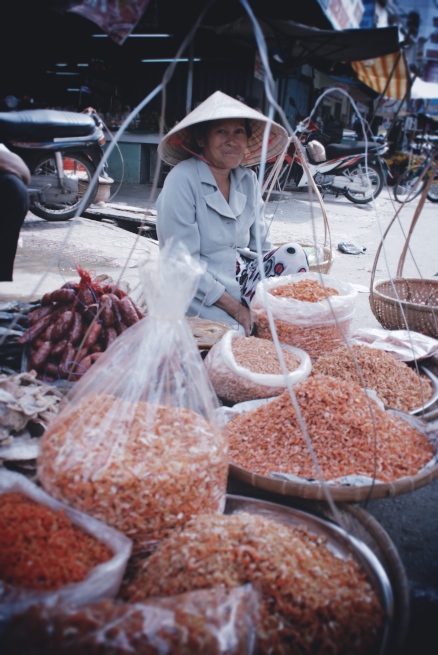 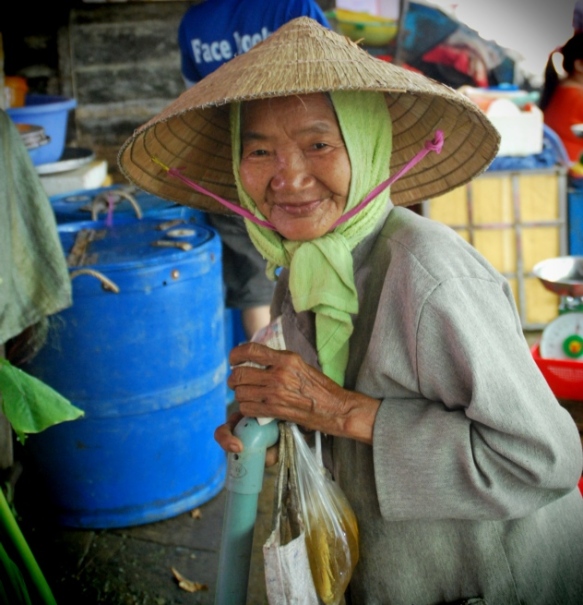 A Vietnamese lady doing her daily produce shop. The marvel is that I saw ladies like this also crossing the road unscathed in HCMC.

I can’t testify to the animal welfare standards in Vietnam – but at least they’re not battery farmed.

A member of our tour group is a hit with the local women. 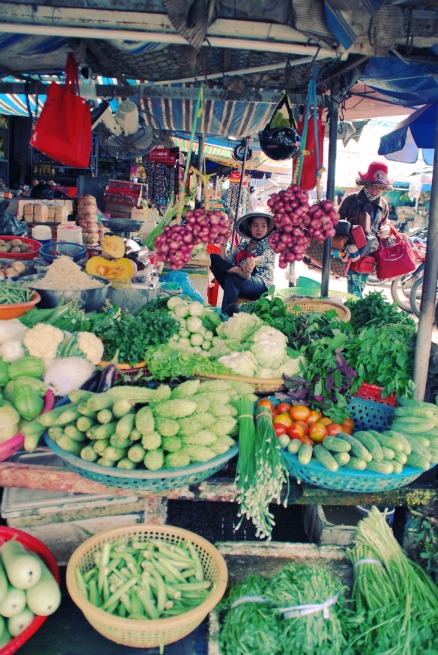 A fruit seller watches a bag seller pass by.

In the Mekong Delta, intensively farmed and super self-sufficient, nothing is left to waste. The water hyacinth, Vien explained, typifies this approach. It is encouraged to grow by the side of the river, to prevent erosion; it is dried and then weaved into baskets; used as feed for animals; as a fertiliser; and finally its leaves are laid on the ground in the dry season to keep the moisture in the soil.

Over the course of a day and a half we also visited a fruit farm, a bonsai farm, a pottery, a floating market and a handicrafts market. Although there were a few tourists in some places, they where overwhelmingly thronging with locals. The impression that I was left with was of a highly efficient, complex and, above all, successful agricultural economy. Even the rolling pin in the handicrafts market used to make sesame snap was recycled – it was an old shell casing.

NEXT TIME: I go cycling in the Mekong Delta. Hilarity ensues.

This post was written in Hanoi, Vietnam and Vang Vieng, Laos.