THIS IS A picture from the day of my wedding*: 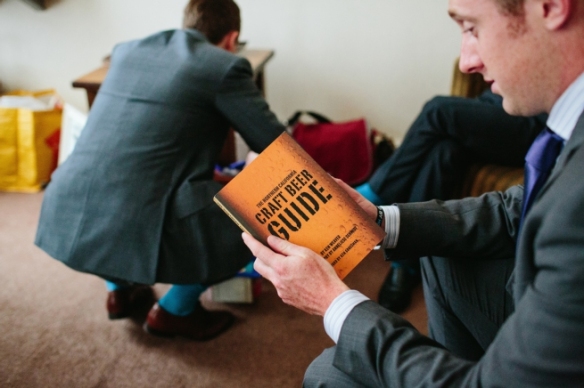 Clearly, this is pre-ceremony. But it’s true that I’d been perusing the Northern California Craft Beer Guide on the morning of my wedding. Anticipation of the honeymoon? Of course not! I was focused solely on getting married. This was an attempt to relieve some pre-wedding nerves. But, yes, now you mention it, I was excited about the beer in NorCal. Obviously this was COMPLETELY UNRELATED to me reading it on my wedding day (that’s not actually me reading it in the picture by the way – I’m the one crouching down into the background and, yes, thank you those are fabulous socks, I KNOW).

*courtesy of our wonderful wedding photographers Christian & Erica, of Christian Ward Photography.  Getting married? Go with these guys. Their photos are art. 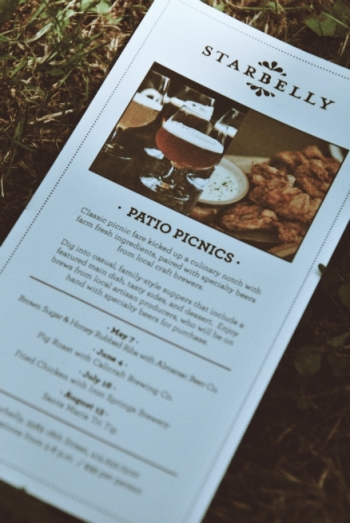 I think that I probably owe a public thanks and apology to Kyle, our server at Starbelly, the first stop on our Beer-Tasting-Trip-That-My-Wife-Mistakenly-Believed-Was-Our-Honeymoon. I won’t lie, I had a bit of a man-crush on Kyle: he was funny and he knew about beer. And he kept bringing me different ones to try. I may also have used the phrase “please could you bring me something more challenging?” Yes, I am that pretentious. And, yes, I do hate myself. Anyway, Kyle gave us free beer because it was our honeymoon (it’s sad that my wife doesn’t like beer, but sacrifices have to be made in marriage, I understand). “If I could do your road trip, I would,” Kyle said to us as we left Starbelly. “You can,” I joked, “we’ll just fit you in our suitcase, it’ll be fine!” The beaming smile that he shot me in return as he ushered us out was definitely one of mutual appreciation, but unfortunately I didn’t have time to verify this fact as he locked the door behind us. Weird. What A Nice Man, I thought, as we walked away, me stumbling slightly.

Anyway, the highlight of any trip to SF for the beer enthusiast, both my guide book and my far geekier beer friends told me, was a visit to the Anchor Brewery. You can only pre-book and the tours get filled up months in advance. So naturally I was excited that we’d managed to secure a space on the tour for when we were there. That morning we were vintiqueing (yeah, I used that word) on Haight Street, which is the hippy, vintage, grimey-but-proud-of-it part of SF. Frankly it’s hard to tell the difference between the hippy (crusty?) folks who live there and the homeless people who, well, probably also live there, but not in a studio apartment. 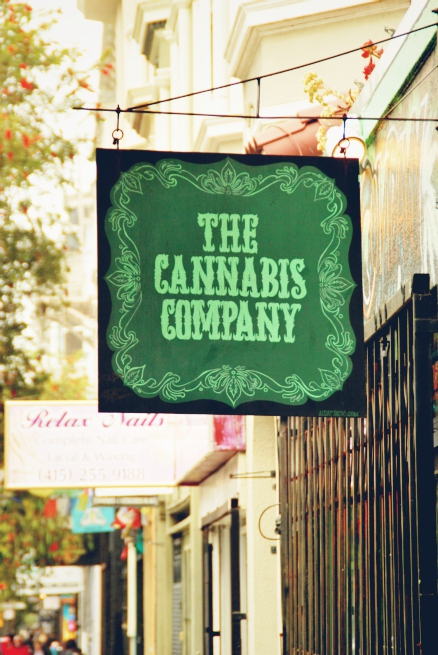 Haight Street is less about the drinking. I was queueing up in a record store to buy some vinyl and the guy in front of me, who had purchased two Star Wars VHS, was chatting to the cashier. “Yeah,” he told him, “I’m just gonna go home, get high and watch these.” Frankly, I pitied him. Can you remember what VHS was like? How would he select the cast commentary? Some things just shouldn’t go retro.

We lost track of time. Or, rather, one of us lost track of time in a dress shop whilst the other fretted over the time. We finished on Haight Street, we rushed to get the 24 bus to Anchor Brewery, passed the rolling fog at the tops of houses (because that’s what happens in SF), passed the congregation of homeless outside the park (because that’s what happens in SF), passed the cars parked at right angles to the kerb (you get the picture), onto the bus, onto another bus…. and we arrived on time! Celebration! Checked in at the desk. Discovered that I got the time wrong! We were an hour late. Devastation! Deep inside me I felt something break. Only thing that held back the tears was It Would Not Be Cool To Cry At Anchor Brewery. “Don’t worry, though,” the guy on the front desk told us, “the tour hasn’t got to the bar, yet, so you can join them for the tasting.” I regained my composure. Manned up. “I think I can do it,” I announced. “To the bar!” 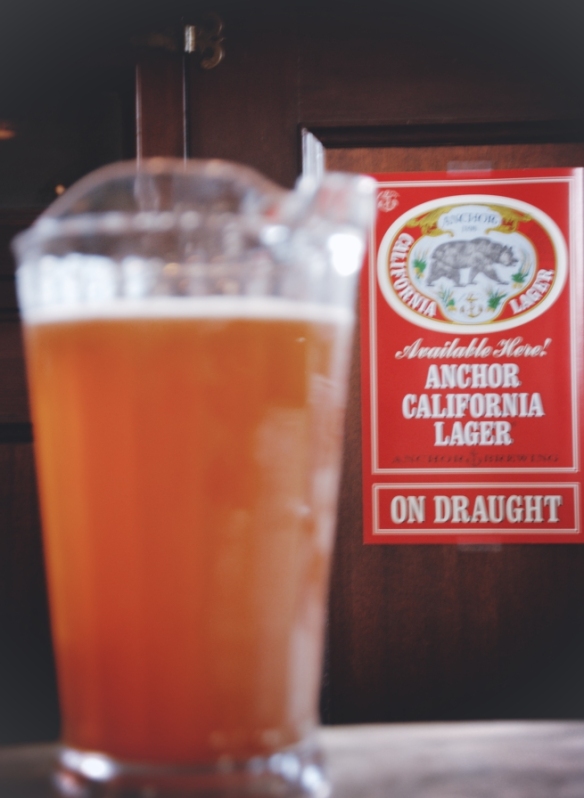 I took what solace I could.

But then magic happened. My wife spoke to one of the brewers, explained the situation and convinced him to take us on a tour of the brewery when he finished his shift. And that is why I married this woman. Or, alternatively, our impromptu brewery tour has something to do with the fact that Anchor Brewing workers can drink on shift, for free, and hang out in their own bar afterwards. They’re just perpetually happy people. Or perhaps it’s just because SF people are some of  the friendliest city people I’ve met. Either way, thank you Ramon, for showing us around the place and sharing some delicious drinks with us in the bar. The lesson? Whether it’s about the people or the drinks, you can never be late for beer in SF. 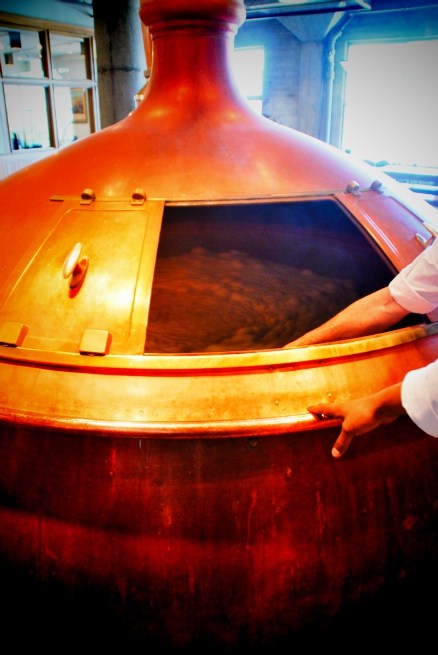 Ramon dips his hand in the… wort? pre-beer? Who knows. Beer Science. 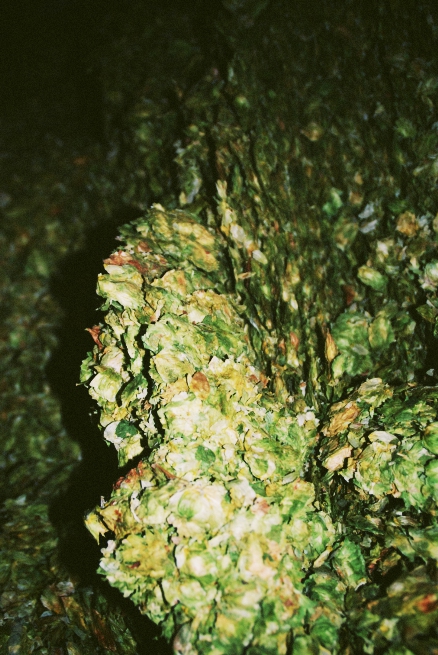 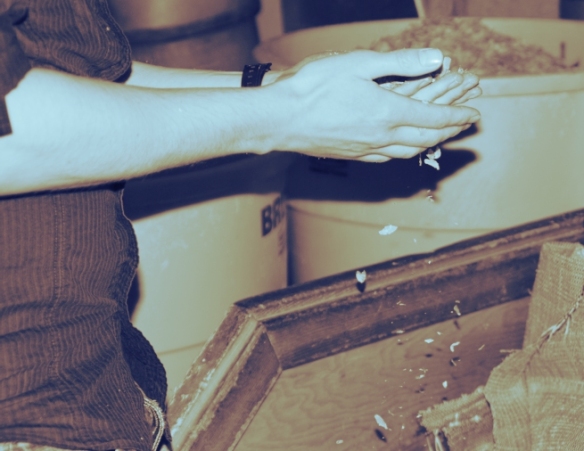 Me rubbing hops through my hands, as encouraged by Ramon. “The only thing is that they’re really oily and you can’t get the smell off with soap,” he told me as he watched me rub them all over my palms. My hands smelt of beer for the rest of the day, as did everything that I touched. It was like a more rubbish version of the Greek King Midas, whose touch turned everything to gold. My touch turned everything slightly beery, except that you couldn’t drink it. This curse probably figures somewhere in Dante’s Inferno. 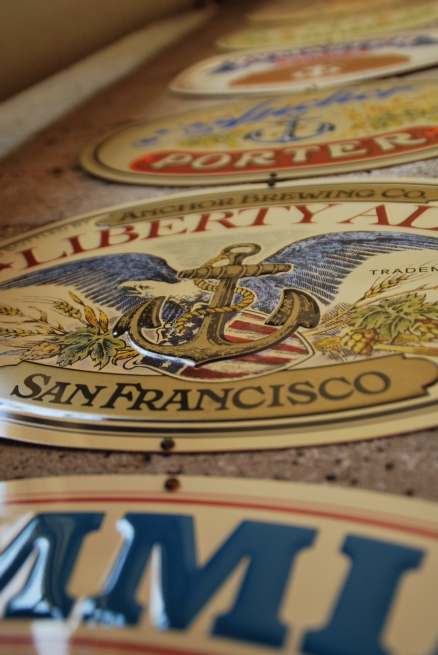 If you ever go to the Anchor Brewery, remember this: there is a cabinet at the back of the tasting room where you can buy Anchor memorabilia. I know this, because I was told about it after I had visited by a sympathetic Canadian who had been there the day before. There’s probably a silver lining to this story, but somehow I can’t really bring myself to write it.

NEXT TIME: I go drinking in the morning.