THE LANGUAGE IS so loaded: Fall of Saigon, Liberation of Saigon. All or nothing descriptors that it’s hard to square. The Vietnam/American war is familiar to me, of course, from so many Hollywood films, so much cultural pastiche (the “/American” added on only, let’s be honest, since I’ve been to Vietnam – where of course it’s called only “the American war”). I thought of it when we first decided to go to Vietnam – but I wasn’t thinking of the war, I was thinking of its cultural imprint. With the exception of the two world wars, it’s hard to think of a war so fictionalised in the West.

So I was surprised, if it’s possible to be so, at my own surprise upon meeting people who had fought in the war – on both sides – and seeing the lasting impact on people living in Vietnam today (and Laos and Cambodia), even people who weren’t born when the war happened.

There are noticeably more amputees in Vietnam, Cambodia and Laos (typically begging on the street) than in any other country I’ve visited. According to estimates by the Vietnam Government, unexploded ordinance from the war still contaminates one-fifth of the country’s total land area, with somewhere between in 350,000 and 600,000 tons of ordinance left to clear. When the Vietcong spilled into Cambodia and Laos to move south, explosive ordinance was also dropped there. In Cambodia, the US dropped more than a million tons of bombs, amounting to at least 26 million individual submunitions (i.e. parts of cluster bombs), of which it is estimated that between 1.9 million and 5.8 million still remain today. Laos suffered heavier bombing than either Cambodia or Vietnam, and is still the world’s most contaminated country from unexploded ordinance. Over two million tons were dropped on Laos, including over 270 million submunitions. There are no reliable estimates of how many unexploded bombs remain in the country today, but about 300 people a year die in Laos from leftover ordinance. There are no statistics on how many people lose limbs every year. 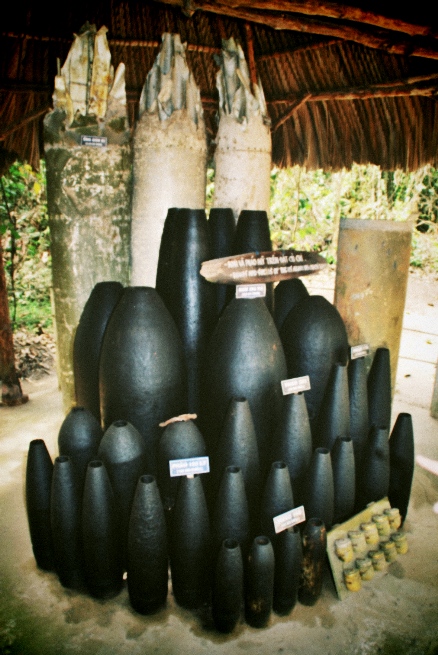 “HAND GUNS, RIFLES, they don’t scare me,” Vien, who fought on the side of the south, told me. “Landmines do. You don’t know: just walking along and – boom!” The USA weren’t the only ones using explosive ordinance in the war – the Vietcongs did too (though, it must be noted, the vast majority of the remaining unexploded bombs were dropped by the USA; and, where the Vietcong did use explosives, it was often salvaged from unexploded American bombs). The favoured Vietcong tactic was to set traps in the jungle, surrounded by landmines. If a soldier was caught in the trap, any attempt at rescue would likely trigger one of the landmines, or else attract the attention of a sniper. When we were in Ho Chi Minh City, we visited the Cu Chi Tunnels, where you can see recreations of the bamboo traps used by the Vietcong.

The Cu Chi Tunnels were underground tunnels used by the Vietcong to evade detection and to move closer to Saigon. Today, they are a monumental tourist trap, where you can go and join hundreds of others watching mechanised models of Vietcong soldiers making traps, disarming bombs, and generally taking on the American imperialists. As with most war-related tourist attractions in Vietnam, the accompanying narrative was a little one sided (incidentally, if you’re reading this and considering going yourself, I wouldn’t bother – it’s a 3 hour trip to get there, including a compulsory stop at a ‘handicrafts’ workshop’, to go and see a bunch of tunnels). There’s also a shooting range, where you can buy ammunition and have a go at shooting an AK47 or an M16, pretending that you’re shooting soldiers of either side, depending on your preference. It’s all in good taste, I’m sure.

Our guide for the Cu Chi Tunnels, Hong, fought on the side of the North, and took great delight in showing us his scars from gunshot wounds on the bus on the way there, alongside telling us about his wife who was 20 years younger than him, at 45. She weighed 84kg, which is 14kg more than him. Such are the things that you must tell people, apparently, to fill up a three hour bus journey.

“I must decide, my father told me, who you fight for,” said Hong. “So I chose the VCs, and fought for the north.” He was in the army from 1967 – 1974, and was shot twice in that period, spending time in hospitals before returning to the front line both times. Hong enjoyed making (very realistic, it has to be said) impressions of the different guns used in the war. Although I would probably file his dramatic re-enactments of skirmishes under the same bad-taste category as the AK-47 shooting range.

The Independence Palace in Ho Chi Minh City was the former residence and seat of power of the South. Today, it is preserved exactly as it was on the day that the North Vietnamese tanks broke through the gates to the palace. It’s all 60s architecture with a creepy sense throughout that someone just left.

LATER, WE SPOKE to Vien about what it was like fighting his countrymen. “It was a horrible war,” he told us. “Everyday, I lost two or three men. I don’t want to shoot people, and I don’t want to get shot. I have a family, they have a family. But if you don’t shoot in the field, then you die. You’ve got to shoot to survive.”
Earlier in the trip we’d seen Vien greeting one of his friends. “He used to be my enemy,” he’d told us, “but now he’s my friend.” So when I asked him how things were now between the North and the South, I was expecting a less hostile answer. “I still don’t like the north,” he said. “They come to the south, but they don’t own it, and they bring their families.”

Vien’s unforgiving answer is perhaps more understandable in his generation: he saw a vision of a different Vietnam, fought for it, and lost. When I’d asked him what the loudspeakers on so many telegraph posts in rural Vietnam were, he’d smiled at me and said: “They’re for propaganda. Bullshit.” Vietnam is a communist country (though anyone seeing the unrestrained capitalism of the country and the entrepreneurial spirit of so many Vietnamese would be forgiven for raising their eyebrows at this fact) with one party, one vision. But those who fought on the side of the south still live here. It’s a distinction which is becoming less relevant, but it still lives on. 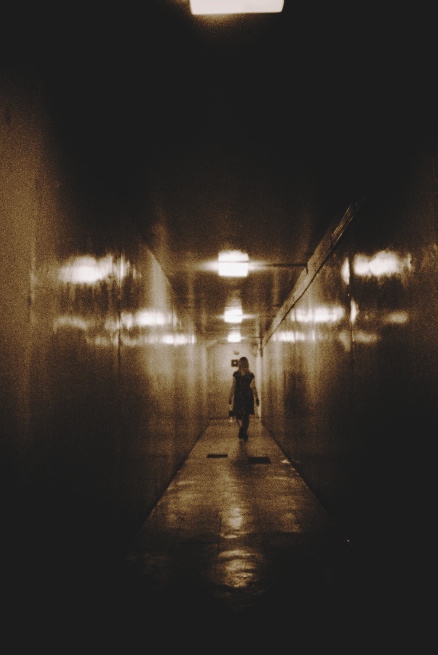 The bunker in the Independence Palace is full of echoing hallways and cold war paranoia. It didn’t provide much protection when the tanks rolled in.

THERE ARE ALSO more visible signs of the war, and not just amputees: I saw at least 4 people born after the war with profound disfigurements, caused by Agent Orange, the chemical used by the US during the war to clear large swathes of foliage. These disfigurements are profound and debilitating – people born with half a face, no arms, a head three times the size it should be. In the War Remnants Museum in Ho Chi Minh City, there is a gallery devoted to the victims of this chemical, people still being born today because it accumulated and settled in the bodies of their parents. I toured that exhibition, wandering past portrait after portrait with my fellow visitors in something deeper than museum-silence. I also visited the exhibition of photographs from the war, taken by a collection of photo-journalists (mostly western), many of whom were killed during the war. After that, I couldn’t face the rest of the museum. Loitering in the lobby, gathering myself after the exhibitions, I saw two Americans (recognised by their accents), both old enough to have fought in the war. One wore a Canada top, the other an England football top, too tight and obviously borrowed. They hovered, awkward and sombre, and one wrote a message in the visitor’s book, before leaving.

WHEN IN HANOI, in the North, we visited the very cool Cong Caphe, and drank Vietnamese coffee. Cong Caphe was on three floors, decked out in military surplus and Vietnam-American war era antiques. It was Vietnam-war chic, the war more kitsch than profound – appealing to a younger crowd. Teenagers hung out on the 70s furniture, all glued to their smart phones. The place was war-influenced, but different – something re-purposed for today. It felt a long way away from Vien’s comments about the north/south relationship.

The youth of today. 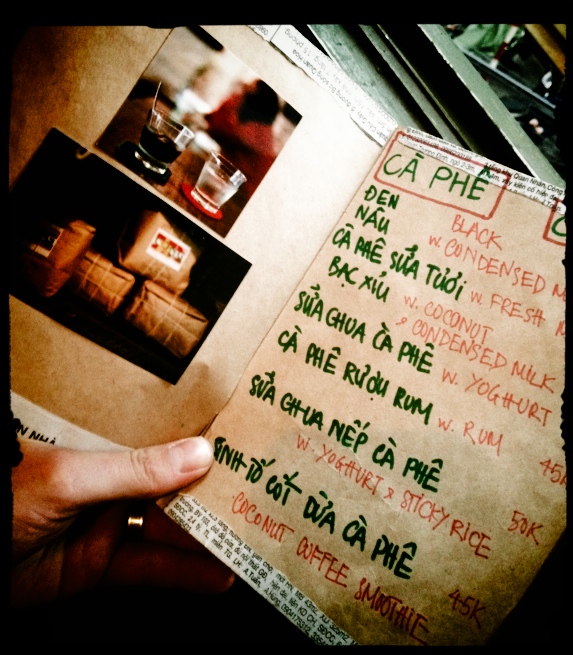 With great coffee too.

My time in Vietnam gave a brief, surface-deep experience of the war’s legacy, and I certainly don’t claim any expert knowledge in the field. The experience was enough, though, to see past the Hollywoodisation of the war; but it was also enough to grasp why this war has had such a long life in books, films and as the theme for trendy cafés. As Tim O’Brien writes in his novel of the Vietnam war, The Things They Carried:

“A true war story is never moral. It does not instruct, nor encourage virtue, nor suggest models of proper human behavior, nor restrain men from doing the things men have always done. If a story seems moral, do not believe it. If at the end of a war story you feel uplifted, or if you feel that some small bit of rectitude has been salvaged from the larger waste, then you have been made the victim of a very old and terrible lie. There is no rectitude whatsoever. There is no virtue. As a first rule of thumb, therefore, you can tell a true war story by its absolute and uncompromising allegiance to obscenity and evil […] But this too is true: stories can save us.”

― Tim O’Brien, The Things They Carried

In this post I have changed the names of people to protect their anonymity.

[Because I am so so far behind in writing about the places I’ve been…..
NEXT TIME: Vietnam Roundup]